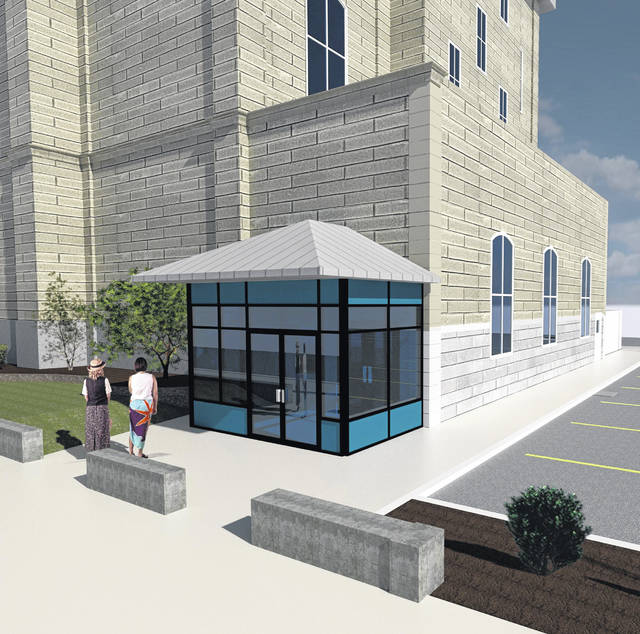 GREENVILLE – The new rear security entrance to the Darke County Courthouse is expected to begin soon.

On Monday, June 10, the Darke County Commissioners voted to award the project contract to Arcon Builders, who submitted the lowest bid — $756,000 — for the estimated $750,000 project.

Commissioners also accepted an alternate bid for $7,100 to extend electrical services if required by DP&L.

The project completion date has been set for mid-December.

“We want everything buttoned up and completed by tax collection season,” said Commissioner Matt Aultman.

Improvements to the courthouse have been on the commissioners’ to-do list for several years – with a focus on renovating the front entryway by replacing the deteriorating steps.

The directive, filed Nov. 19, ordered a “single entry and other courthouse security measures.”

In early April, commissioners met with the courthouse security team and architects at Mote & Associates to review and approve a proposal for a new rear entrance.

The project includes the construction of a 1,000-square-foot annex at the rear entrance of the building.

Upon completion, the front entrances of the courthouse will be closed permanently and will be used only as emergency exits.

Mote & Associates also worked closely with the Darke County Sheriff’s Office, which will be providing deputies to man the new entry.

New features will include bullet proof glass in the windows of the annex and a holding cell big enough to fit three prisoners, which was a request made by Sheriff Toby Spencer.

The new addition also will be ADA compliant.