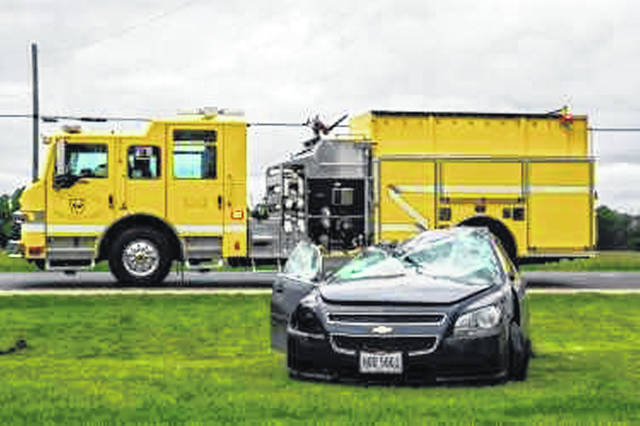 VERSAILLES – A single-vehicle accident resulted in two people being transported to Wayne HealthCare after the vehicle they were in rolled multiple times.

At approximately 2:11 p.m., emergency personnel from Versailles Fire Department and Ansonia Rescue, along with deputies from the Darke County Sheriff’s Department were dispatched to the 7400 block of State Route 47 East in reference to a single-vehicle rollover accident with injuries. According to the Darke County Sheriff’s Department, a preliminary investigation into the accident has revealed that a blue 2010 Chevrolet Malibu was traveling eastbound on State Route 47 when the driver of the vehicle, 19-year-old David Holdeman of Greenville, lost control of the vehicle and veered off the right side of the roadway striking a driveway culvert and a mailbox.

Holdeman’s vehicle rolled multiple times before coming to rest in the front yard of a private residence located at 7443 State Route 47 East.

Holdeman and his front seat female passenger were both treated on the scene for non-life threatening injuries before being transported to Wayne HealthCare in Greenville. Holdeman was issued a citation for failure to maintain reasonable control of his vehicle.