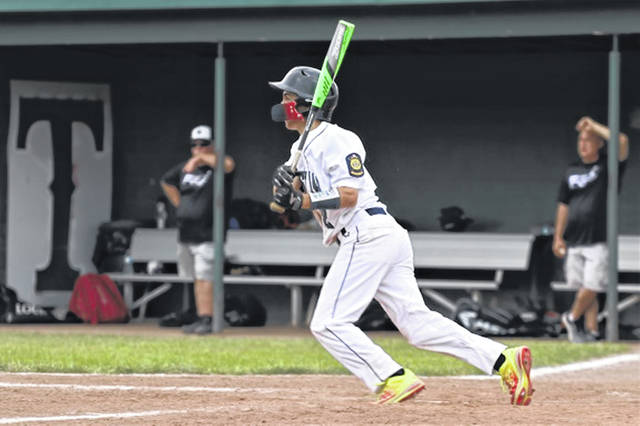 “The Troy game had a lot of emotion behind it, but we have played each other so much,” said Post 140 coach Chad Henry. “I’m proud of the way my guys handled their business and used their play to speak volumes.”

Trent Collins sat Troy down in order in the top of the first inning of play bringing Post 140 to the plate in the bottom of the inning to score two runs by way of a Zac Longfellow opening single to center, a Tyler Beyke walk and a Casey Jones RBI single to left. Jarin Young followed with a two-out run scoring single to center to give Greenville a 2-0 lead after one inning of play.

“Our runs were gritty at first, putting runner is motion at the right times opened up two holes in the infield and helped plate the first two,” Henry noted.

Tytan Grote knocked a one-out single to get things rolling in the bottom of the fourth for Post 140 followed by a Logan Stastny walk and a 2-run line drive triple to center off the bat of Longfellow with Longfellow scoring on the play scoring the third run of the inning on the throw.

“After Troy came back to take a one run lead, we loaded the bases up and Zac (Longfellow) belted a triple to left-center that scored him on an overthrow into the dugout,” Henry stated. “The way the dugout erupted on that gave me a good feeling they wanted this game bad.”

“The very next inning Trent (Collins) belted his second homerun of the tournament with a no doubter to to left-center,” added Coach Henry. “We continued to add from that point and never looked back. All the talking stopped from that point.”

Trent Collins drilled a 0-1 count over the left field fence for his second home run in as many games to give Greenville Post 140 a 6-3 lead with five innings in the book.

Post 140 put the game away in the bottom of the sixth taking advantage of an Alec Fletcher leadoff single, back-to-back walks to Beyke and Longfellow and a Troy wild pitch scoring Fletcher for a 7-3 Greenville lead.

Jones used Post 43’s third consecutive walk to collect an RBI, scoring Longfellow. Greenville made it a 9-3 game with a Darrin Hays RBI fielder’s choice to short, went up 10-3 with Longfellow racing home on a wild pitch and scored the game’s final run with a Stastny sacrifice fly to left scoring Jones.

“Trent was up today but we were on a tight pitch count because of the league game with Piqua on Tuesday,” said Henry. “So for Tyler (Beyke) to come in and slam the door like he did was incredible. He has been slowly working his way back from a shoulder injury during football and as a result has not thrown much at all this year off the mound.”

Beykey sat Troy down in order in the top of the seventh to compete four innings on the mound, allowing one run on two hits and striking out four to earn the win for Greenville.

The Greenville Legion Post 140 Thunder went 4-5 in the weekend tournament with the team’s lone loss coming in a game played without the services of three player that were taking their ACT.