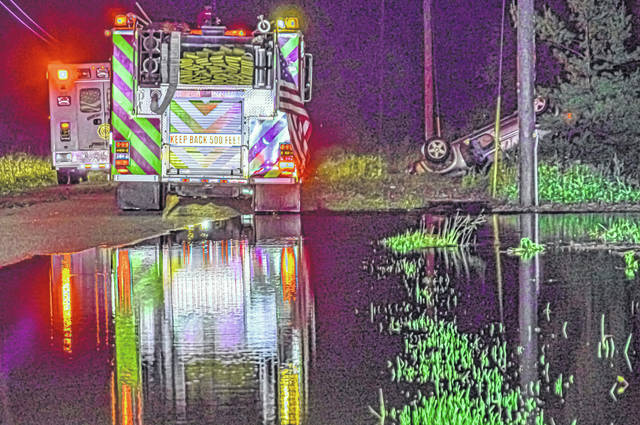 UNION CITY, Oh — High water and debris left behind by a flooded roadway may be the cause of an overnight rollover accident on North State Line Road outside Union City.

At approximately 11 a.m. Sunday, emergency personnel from Union City Fire and Rescue as well as deputies from the Darke County Sheriff’s Department were called to the 10,000 block area of North State Line Road north of West Deerfield Road in regards to a single-vehicle rollover accident with possible injuries.

According to the Darke County Sheriff’s Department, a preliminary investigation into the accident has revealed that a silver Chevrolet Equinox was traveling northbound on North State Line Road when the driver lost control of the vehicle after encountering high water across the roadway. The driver attempted to regain control of the vehicle but was unable to do so after making contact with mud and debris left behind by the receding flood waters resulting in the vehicle sliding off the right side of the roadway, overturning and coming to rest on its top.

The 17-year-old male driver of the vehicle was treated by Union City Rescue for minor injuries prior to being released to his parents on the scene after refusing any further treatment and transport to a medical facility.