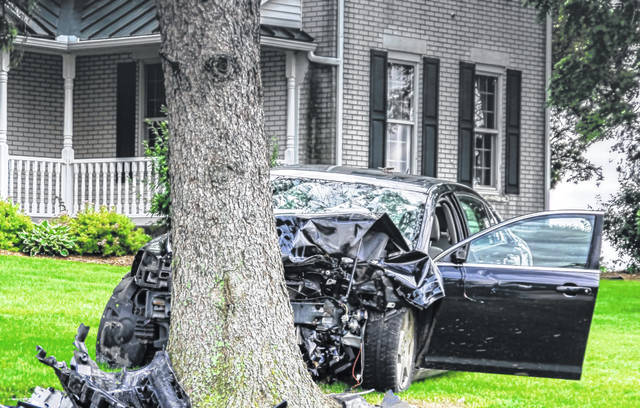 At approximately 1:07 p.m., emergency personnel from Greenville Township Fire and Rescue with mutual aid from Ansonia Fire and Rescue as well as deputies from the Darke County Sheriff’s Department were dispatched to the 8300 block of State Route 118 in regards to a single-vehicle accident with injuries.

According to the Darke County Sheriff’s Department, a preliminary investigation into the accident has revealed that a black 2010 Chevrolet Malibu, driven by 20-year-old Taylor Bruns of St. Henry, was traveling northbound on State Route 118 when Bruns suffered from a suspected medical condition causing her to lose control of her vehicle and veer off the right side of the roadway passing through a fence.

Bruns’ vehicle continued traveling northbound through a pasture passing through another portion of the fence before coming to rest after hitting a tree head-on in the front lawn of Crystal Creek Farms, located at 8399 State Route 118.

Bruns was treated on the scene by Ansonia Rescue before being transported to Wayne HealthCare for what was described as non-life threatening injuries.

A front seat passenger of the vehicle, 20-year-old Kendra Rose of Burkettsville, was treated on the scene by Greenville Township Rescue for non-life threatening injuries before being transported to Wayne HealthCare. Rose was later transported to Miami Valley Hospital, where her condition remains unknown at this time.