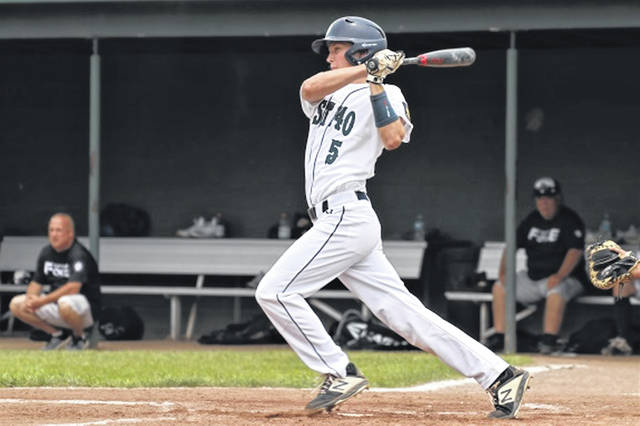 “It was a good experience for the kids,” said Greenville Thunder, American Legion Post 140 coach Chad Henry. “That’s what we want. We have to get kids out there, stay together, hang out together and go out there and play ball.”

Opening day tournament games were mostly washed out by Thursday thunderstorms with clearing skies allowing games to be played Friday and Saturday.

No Sunday championship round was played doe to weather issues with the tournament concluding Sunday morning at Robin Harvey Memorial Field after one game was played.

Post 140 played Clearfield, PA Legion Post 6 to a 7-7 tie in the team’s opening game of the tournament racking up eight hits with two each coming from Zac Longfellow and Terry Miller.

Game No. 2 had Greenville Post 140 jumping out to an early lead over Moorefield, WV Legion Post 64 on their way to a 12-6 Friday win.

Cameron Shimp opened on the mound for Post 140 tossing three innings with Tyler Beyke pitching two innings of no hit middle relief allowing no walks and striking out three to earn the win. Casey Jones nailed down the victory recording the final three outs to get the save.

Greenville pounded out 11 hits with Shinabery going 3-3 including a double at the plate while Lawson was 2-2 with a double and Young going 2-2. Post 140 tore up the base paths as three players stole at least two bases. Young led the way with three steals.

“The kids hit really well in that one,” said Henry of the Moorefield game. “We ran all over them.”

The third game for Post 140 had Kenny Moore using just 76 pitches to record a complete game four-hit shutout over Moundsville, WV Legion Post 3 to keep Greenville undefeated with a 3-0 victory.

“Kenny pitched a complete game,” noted Henry. “Moundsville threw a lefty that pitched college last year who threw 83-84 (MPH) with a nasty hook. It’s one of those you go in there – ‘we’re not going to hit this guy today,’ but we just chained a few hits together and had a few stolen bases.”

“Moundsville was just solid,” add Henry. “It’s one of those games you were just scratching for every run you could get and we put together an inning.”

Over seven innings of work, Moore allowed four hits while striking out two.

Tyler Beyke went 2-for-3 at the plate to lead Greenville Post 140 in hits and Trent Collins accounted for a double while the team was flawless in the field playing error free ball.

Greenville had trouble producing runs in Saturday’s gave with South Charleston, WV Legion Post 94 dropping a 12-5 game in the team’s lone loss of the weekend tournament.

“That South Charleston team was good,” Henry said. “It was 6-5 in the sixth and then the wheels just kind of came off.”

Post 140 took advantage of a one-out double off the bat of Beyke, a Collins run scoring double followed by a Jones single. Shinabery knocked a RBI single to make it a 2-0 lead followed by a Young RBI base hit to make it a 3-0 score.

“We went out and scratched another one out,” Henry said. “We came out hitting bombs and I was like, ‘balls flying tonight,’ and then silence – nothing happened. We took a 3-0 lead right in the beginning of the game and then didn’t score until an insurance run in the sixth.”

Tyler Beyke earned the win for Post 140 allowing five hits and two runs over four innings, striking out one and walking one. Collins picked up the save tossing 3 complete innings while allowing one hit.

“I wanted to save Tyler and didn’t have a lot of options left,” noted Henry of his starting shortstop. “You want to hold your shortstop until the last game because you want your shortstop to play through.”

Longfellow hit an RBI single in the bottom of the sixth in what proved to be the winning run for Greenville Post 140.

Greenville tallied nine hits in the game led by Beyke with a single and a double and Casey Jones accounting for two singles.

The Greenville Thunder, Legion Post 140 completed the Hillbilly Hardball Classic with a respectable 3-1-1 record competing against some of the country’s best American Legion teams.