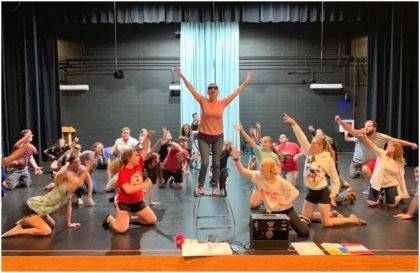 VERSAILLES – Versailles’ community theater group, Towne & Country Players, is now selling tickets for their highly-anticipated summer show, Mamma Mia! This is currently the hottest show of the year, as over 37 different groups in Ohio alone are preparing for Mamma Mia! within the next year.

The musical, based on the music of Swedish 80’s super group ABBA, focuses on 20-year-old Sophie Sheridan’s search (played by Megan VanSkyock) for her real father days before she is to walk down the aisle and marry long-time boyfriend Sky (played by Mason DeMange). After snooping in her mom’s diary (Donna Sheridan – played by Renee Seibert), she finds that there are three possible dads (played by Ken DeMange, Chad Peyton, and Sam Graves).

Helping Sophie try to determine who her real dad is are her best friends – Alli, Lisa, Kara, and Maggie (played by Alli Cox, Anna Groff, Cali Groff, and Erin Luft). Trouble is, the more they find out, the more confused Sophie becomes.

Supported by an ensemble of over 35 people from multiple hometowns, Towne & Country Players’ production of Mamma Mia! is sure to have people rolling in their seats and dancing in the aisles from the beginning until the surprise ending!

Tickets are now on sale for the July 16th-July 20th shows by going to www.TowneAndCountryPlayers.com and clicking on the banner at the top of the page, or by calling the Mamma Mia! box office at (937) 381-7339.