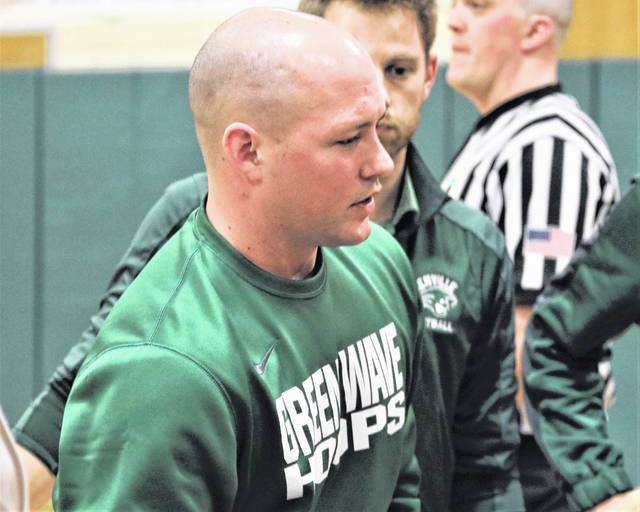 GREENVILLE – Greenville Board of Education voted 4-1 on Thursday to approve a one-year supplemental contract for varsity basketball coach Kyle Joseph.

Fred Matix, who last month asked the board to remove Joseph’s contract approval from the board’s agenda until more discussion could be held, was the dissenting vote.

The approval of Joseph’s contract came following the regular public participation portion of the meeting.

Three individuals spoke to the board concerning Joseph’s employment.

In a statement read by his wife Sara, Joseph said he will “remain undeterred by the noise” surrounding his and the team’s performance while he has been coach.

Joseph was unable to attend the meeting due to being at basketball camp at Cedarville University.

In the statement, Joseph also said despite the poor performance of the team under his tenure, he considered his “greater task” was to “build a program.”

Joseph also said he was “not taking shortcuts to achieve goals” and that he considers himself “qualified and prepared” to lead the program.

Prior to Sara Joseph reading her husband’s statement, two former Greenville teachers addressed the board.

Both Trace Snyder and Lee Stanley said they believed the boys basketball program needed “a change.”

Snyder said he had spoken with board members, the athletic director and Superintendent Doug Fries about Joseph’s performance as a coach and the team’s losing record.

“In three years,” Snyder said, “you should be showing some progress. I think it’s time for a change.”

Snyder also told the board he’d heard Joseph’s contract was being approved with “contingencies” being placed upon the coach.

“Can we know what those things (contingencies) are?” Snyder asked.

Both Fries and board president Brad Gettinger told Snyder there were “no contingencies” although there were always “goals” set for employee performance.

“We’ve got to make some changes in basketball,” he said. “The longer we wait the worse it’s going to get.”

Stanley also brought up the financial angle of high school sports, pointing out the district may start to “feel it financially. People are going to start staying home. People, we’ve got to make a change and board, you’ve got to do it.”

The board approved Joseph’s supplemental contract with a salary of $6,740.

Westerbeck will be replacing David Torrence, who resigned last month to take a position with another district.

Westerbeck comes to Greenville from Sidney City Schools, where he was an assistant principal at the high school.

In April, Westerbeck, along with two other administrators, was reassigned by the Sidney superintendent for the upcoming school year.

According to a news article published by the Sidney Daily News on April 26, Westerbeck was being reassigned to be a teacher in the Sidney Alternative School.

The newspaper reported the reassignment was the result three Sidney school administrators failing to complete teacher evaluations. The Sidney superintendent told the Sidney Daily News that “timelines were not followed” and “certain parts of the evaluation(s) were not done.”

Prior to Thursday’s Greenville Board of Education meeting, Fries told The Early Bird he was aware of Westerbeck’s history with Sidney City Schools.

“We are aware and checked all references,” Fries said, noting the confidence he has in the new assistant principal’s abilities to serve GHS.

The board approved a two-year administrative contract with Westerbeck, at $76,000 per year.