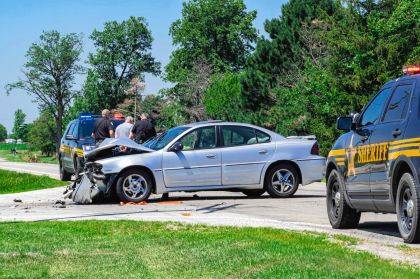 ROSSBURG – A two-vehicle crash Saturday afternoon has led to an arrest by Darke County Deputies of a driver suspected of OVI. At approximately 2:30 p.m., deputies from the Darke County Sheriff’s Office were dispatched to the intersection of State Route 49 North and Brock-Cosmos Road in regards to a possible two-vehicle accident with unknown injuries.

According to the Darke County Sheriff’s Department, a preliminary investigation into the crash revealed that a maroon 2015 GMC Sierra, driven by Paul Friend, 53, of Daleville, Ind., was traveling westbound on Brock-Cosmos Road when he failed to yield to oncoming traffic and pulled into the pathway of a silver Pontiac Grand Am driven by Brooke Neuhauser, 21, of Roanoke, Ind., traveling southbound on State 49 North. The Pontiac Grand Am collided into a utility trailer being pulled by the GMC Sierra causing a second smaller trailer that was being hauled to break free and come to rest off the roadway.

The female driver of the Pontiac and the male driver of the GMC, both sole occupants of their vehicles, were uninjured in the accident and refused any medical treatment. Deputies, having reasonable cause to suspect that alcohol played a factor in the accident and Friend was asked to perform a field sobriety test in which he performed poorly. He was then placed under arrest for the suspicion of OVI and transported from the scene by deputies.

PHOTO CAPTION: A driver suspected of Operating a Vehicle while Intoxicated was arrested by the Darke County Sheriff’s Department. Jim Comer | DarkeCountyMedia.com