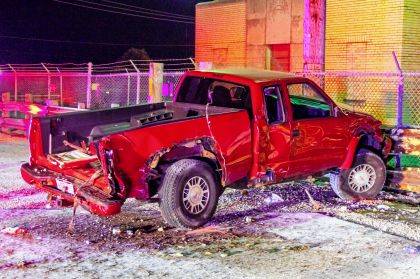 GREENVILLE – An early morning single-vehicle crash Sunday resulted in a driver being transported to the hospital for his injuries. At approximately 2:35 a.m., emergency personnel from Greenville Township Fire and Rescue along with deputies from the Darke County Sheriff’s Department were dispatched to the 5100 block of SebringWarner Road in regards to a possible accident with injuries.

According to the Darke County Sheriff’s Department, a preliminary investigation into the accident revealed a red 2000 GMC Sonoma driven by 27-year-old Jordan Gary, of Greenville, was traveling South on Sebring Warner Road. Gary failed to maintain control of his vehicle traveling off the right side of the roadway striking a guard rail and a fence in front of the DP&L substation, located at 5120 Sebring Warner Road, before coming to rest. Gary was treated on the scene by Greenville Township Rescue for his injuries before being transported to Wayne HealthCare for further evaluation. Darke County Deputies do believe that alcohol is a factor in the crash.