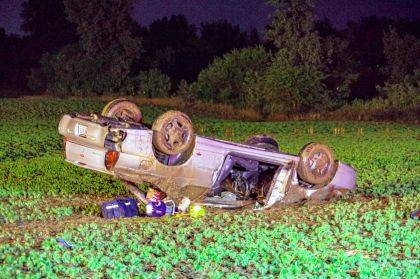 GREENVILLE – Two people were injured Sunday evening after the vehicle they were operating left the roadway and rolled at least once before coming to rest on its top. At approximately 9:25 p.m., emergency personnel from Greenville Township Fire and Rescue along with deputies from the Darke County Sheriff’s Department and an officer from the Greenville Police Department responded to the 4600 block of Children’s Home Bradford Road in regards to a single vehicle rollover crash with entrapment.

According to the Darke County Sheriff’s Office, a preliminary investigation into the incident revealed a silver Monte Carlo driven Staci Blocher ,46, of Greenville, was traveling westbound on Children’s Home Bradford Road when the driver failed to maintain control of the vehicle and crossed left of center leaving the roadway. The Chevrolet rolled at least once before coming to rest on its top in a field.

The Ms. Blocher and her front seat passenger, Shawn Jackson ,45, of Greenville, were extricated from the vehicle by Greenville Township Fire Department before being treated on the scene by Greenville Township Rescue and transported to Wayne HealthCare. A Mobile Intensive Care Unit From Miami Valley Hospital’s CareFlight Air and Mobile Services was requested to meet crews at Wayne HealthCare. Jackson was transported to Miami Valley Hospital.