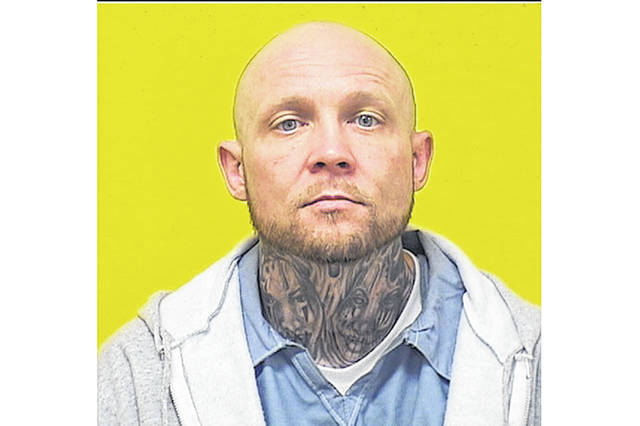 GREENVILLE – Facing a 19-count indictment, Stephen A. Garner, 38, of Ansonia appeared in Darke County Common Pleas Court Tuesday for the first day of his jury trial.

Garner is accused of bringing methamphetamines inside the Darke County Jail on April 17, 2018, which resulted in the closing of the facility for 24 days and costing the county $123,851,52.

His charges include illegal conveyance of drugs on the grounds of a detention facility, vandalism, aggravated possession of drugs, tampering with evidence, assault, and felonious assault.

During opening arguments, assistant prosecutor Jim Bennett told jurors to ask themselves “did his conduct on a certain date violate the law?” and urged them to follow the legal terms and not what they “think it should be” as they hear and consider testimony.

Garner’s defense attorney David Rohrer told jurors he was aware his client was addicted to drugs.

“My client is guilty of entering” the jail with drugs, Rohrer stated, adding: “When this came down, there were two or three charges. Now there are 19” placing into question assault charges made by jail staff.

Rohrer also said his client would not be taking the stand. “That’s my advice as his attorney.”

Witnesses appearing Tuesday included several Darke County Sheriff’s deputies and corrections officers who were working at the jail on April 17 and 18.

According to testimony, the incident began when Greenville Police Department picked Garner up on an adult probation violation on April 17, 2018, transporting him to the county jail around 12:35 p.m.

Deputies testified they asked Garner if he had anything on his person that would be harmful – drugs, weapons, contraband – and he said he did not.

A pat down and search were both conducted and Garner was taken to the locker room adjacent to the processing room to change from his street clothes to jail attire.

A male corrections officer was with Garner in the locker room.

“I could see he was a little squirmy,” while attempting to put on the pants, the corrections officer (CO) said Tuesday.

It was at that point, the CO said, he saw several plastic baggies fall from Garner, who had concealed the baggies in a body cavity.

According to the CO, Garner reached down and scooped up the baggies with his shirt, clutching them in his hand. The CO radioed for assistance.

Garner also attempted to hide the baggies, which contained a white powdery substance, in his mouth, COs testified.

A female CO responded to the call and when she learned what was taking place, she ordered Garner to hand over the baggies. She also said she pulled the shirt away from Garner’s arm and hand, revealing the baggies.

At this point, jail staff did not know what substance was inside the baggies and feared it could be fentanyl.

When Garner did not comply with orders to drop or hand over the baggies, the female CO pulled her Taser

The captain on duty also went to the locker room to assist and testified Tuesday that he ordered Garner to hand over the baggies a few times.

Garner then turned and placed his hands on top of lockers. All three deputies said it looked as if he was contemplating what to do next before he turned and ripped open some of the baggies, throwing them onto the floor.

After Garner was taken to a holding cell, one of the COs asked him if it was fentanyl inside the baggies and he replied “you’ll find out.”

Over the course of the next two days, several jail employees became ill and had to be transported to Wayne HealthCare emergency room with symptoms including high blood pressures, dizziness, nausea, and severe headaches.

The female deputy and Garner also were both treated with Narcan for their symptoms.

It was not determined until the following day, April 18, that methamphetamine had contaminated one of the jail’s air handler units.

While the jail was closed for cleaning and repairs, inmates had to be housed in neighboring counties, including Mercer and Miami.