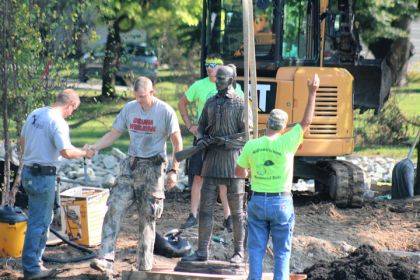 GREENVILLE – Work began this week to restore the small island in the Greenville City Park. The island, deemed Little Turtle Island, was cleared of trees and weeds early in the week, but by Thursday afternoon the project was beginning to take shape.

According to Jenny Clark, president of Friends of the Greenville City Parks, the island will feature a few new decorative trees, waterfall, flowers and other landscaping features including plenty of lighting. However, the centerpiece of the island will be a bronze statue of Chief Little Turtle. With Greenville set to celebrate Treaty Day on Aug. 3, Clark believes the tribute to the Miami chief is timely. He was one of the signers of the treaty.

The statue was created by local artist, Joshua Shephard of Union City, Ind. Clark explained the Friends wanted a statue, but had no idea where to look for someone who could do the work. She made a trip to Garst Museum and director Dr. Clay Johnson pulled out a file he received from Shephard showing some of his work. “I had no idea there was someone local that did this type of work,” she said. After viewing the statue, Clark was elated with how it turned it out. Some of the other members of the Friends group pointed out the detail on the statue.

The island restoration and statue was made possible through local donations and a $100,000 grant from the State Capital Funding Bill. The restoration was estimated to cost $165,000.

Hupman’s Landscaping, who was contracted to complete the project, tried to save the waterfall, but Clark said it just fell apart. A new waterfall will be installed in the next few weeks.

Clark is hoping the entire project will be completed within the next three weeks.

The project was originally slated to begin in June, but this spring’s wet weather forced the delay.

Friends of the Greenville City Parks completed restoration of the big island, known as Treasured Island, in July 2017. 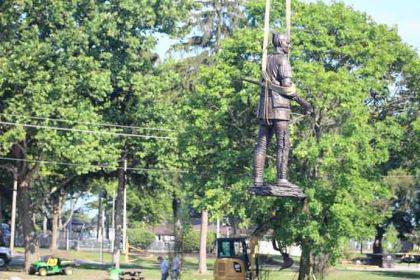