GREENVILLE — Beginning today, downtown Greenville will be filled with the sweet aroma of homemade cinnamon rolls, muffins, and cupcakes.

“This is a long time dream,” Sean said prior to the ribbon cutting. “I’m 45. I don’t want to have regrets” about not following his dream.

Sean will be serving as the Beanz baker, says Kristi.

“He has loved cooking and baking since he graduated from high school,” Kristi said of her husband. “And he often wishes he’d taken his parents up on the opportunity to go to culinary school. He’s always been well known in our family for preparing delicious meals.”

Kristi, who was named executive director last summer at State of the Heart Hospice will be keeping her job.

“I have a wonderful job and will continue doing that,” she said, noting Sean left his full time position at IBS in Dayton to devote his time to Beanz.

The new venture, located at 316 South Broadway, will feature only homemade baked goods. Sean does not use any boxed mixes or prepared ingredients.

“Even the caramel drizzle and fillings are homemade,” Kristi said. “Sean started baking seven or eight years ago when his mom asked him to make cupcakes for his grandparents’ 50th wedding anniversary. The challenge was accepted.”

“The bakery is named after our daughter,” said Kristi who explained Corynna’s nickname was Bean.

In December 2013, Corynna passed away at the age of 16 after being diagnosed with mitochondrial disease, an incurable genetic disorder.

“We were unable to secure the location,” she said, noting how time spent on the annual fundraiser was instead spent on planning for the opening of Beanz Buttercream Bakery.

“We believe everything happens for a reason,” she said.

During Tuesday’s ribbon cutting ceremony, Sean shared how they kept Corynna busy during her illness, looking up cupcake recipes. She also drew the bakery’s logo, which is featured prominently on the storefront’s window.

When he came home from work in the evenings, Corynna would say “you gotta try this.” They would bake together until Corynna was too weak to help, then Sean would try the recipes she found by himself.

Sean also will be doing all the baking and serving customers at Beanz.

Other Beanz offerings will include made-from- scratch cheesecakes, pinwheels, cookies, and breads.

The bakery also will serve Twisted River coffees, which originated in Dayton.

“We’re not out to be a coffee shop,” Kristi said. “But we wanted a nice choice for people who wanted coffee with their baked goods.”

Customers also will have a choice of indoor and outdoor seating at Beanz and may want to consider ordering custom designed cupcakes for their next party.

Other ideas come from friends. A woman sent Sean a message on Facebook asking if he could make Irish soda bread.

“That will now be a specialty,” Kristi said, at Beanz.

“It takes a lot of courage to leave a job you’ve had for over 20 years. What makes entrepreneurs successful and fearless is their passion,” she told the Strawsers.

Beanz will be open six days a week, Monday through Saturday as follows: 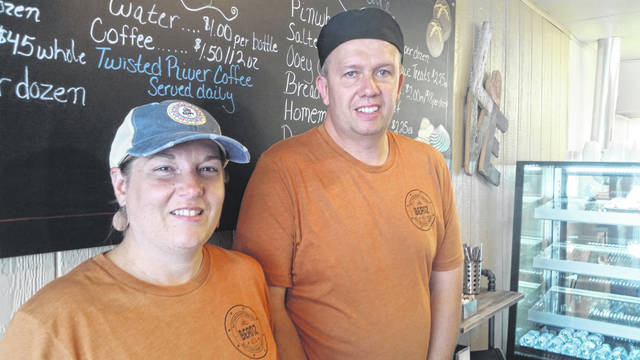