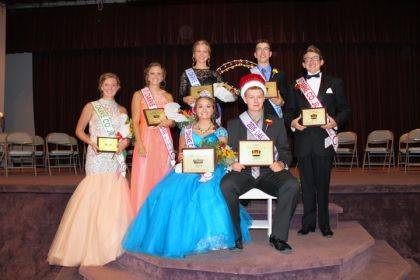 GREENVILLE – With a little less than a month until the start of the Great Darke County Fair, the excitement is building. For two junior fair exhibitors, the excitement was at a fever pitch when they heard their names called as the 2019 Darke County Junior Fair King and Queen. Jacob Wuebker, 17, of Versailles, and Victoria “Tory” Wuebker, 16, of Versailles, earned the top monikers.

The Wuebker cousins topped 19 other girls and two other boys to win their crowns.

The 23 contestants endured two days of questions. The initial interviews were held on Monday when each candidate stood before the judges to answer a series of questions. On Tuesday, the night of the pageant, the contestants stood before a packed house at the Lighthouse Christian Center’s All Season Place to answer questions. The top seven girls and top three boys were selected for the finals and the opportunity to answer one more question to determine the king and queen and their court.

Tory, who competed for the first time in the contest this year, said, “I’m shocked. I was not expecting to get queen this year. I wasn’t expecting to get anything this year. Then, when my name was called for queen, I was like, this is amazing.” She isn’t the first in her family to serve as royalty at the fair. Her brother, Kyle Wuebker, served as the 2018 Fair King. Unfortunately, Kyle couldn’t be at this year’s festivities as he is at Boot Camp for the U.S. Marines Corp. Tory also had a sister that served on the queen’s court. Her father was the 1991 king.

Jacob served on the king’s court last year as the first runner-up and believes he has an idea of what to expect, but this year he said he is going to “enjoy it a little more.” He continued, “Being king comes with a few more perks than being first runner-up. It is just going to be a blast.” He is also excited about serving with his cousin. “We live right beside each other, so, it will be nice and easy to be able to talk to her.” His father was king in 1988.