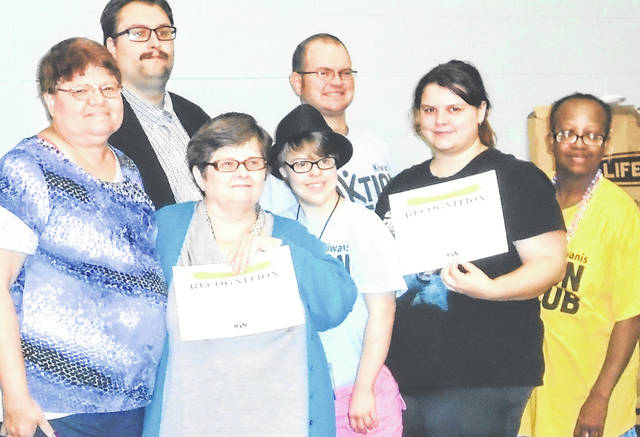 GREENVILLE — The Kiwanis Aktion Club has been making a name for itself out in the community — all over Darke County. It is a non-profit organization, which supports a lot of other organizations, communities and individuals through its service and fundraisers.

Not only are those who benefit from their generosity loving it; the members of Aktion Club love doing it. President of the group is Sam Ploch, while other officers are Lauren Warner, vice president; Alice Messer secretary; and Ryan Burnett, treasurer, who collaborate under the leadership of co-advisers Sue Huston, community connections and advocate coordinator, and Cheryl Pressly, employment and community and resource coordinator, both from the Darke County Board of Developmental Disabilities.

“The Kiwanis Key Club and the Aktion Club do various things for the community,” Ploch said.

One project is making chemo bags and filling them with various supplies to give to those who need them.

“We have decided to make it an ongoing project,” said Huston. “A lot of money goes toward that.”

They have purchased two wagons full of toys for Children’s Hospital in Dayton; adopt families at Christmas time and donate food and toys to them; support Empowering Darke County Youth with meals; and holds such fundraisers as Trophy Nut sales and Miss Wick’s Pies sales.

They have made business appreciation deliveries to Lowe’s and Hospice; worked at the Rotary Lemonade Stand at Poultry Days; and recently donated $150 to send to Montgomery County Board of Developmental Disabilities’ Emergency Relief Fund to help those affected by the recent tornadoes.

“They work hard to give money to others,” said Huston.

The 48-member group meets monthly at the Ansonia United Methodist Church, while the officers, Kiwanian Adviser Phil Crawford and Huston and Pressly meet the second Monday of every month at Edison State Community College.

“We started meeting at the Ansonia church because the director of Your Happy Place’s husband was pastor here,” Huston said. “Now, there is a new pastor who loves having us here. And, it’s a midpoint from Union City.

Membership of the club include those from the following day-hab facilities: Person Centered Services and Your Happy Place, both of Greenville, and Art Sense of Union City.

“Most of our members attend, and there are some who come who live in their own homes,” Huston said. “We couldn’t do this without the day-habs, especially with transportation being an issue.”

Another figure at the meetings will be Kelly Nguyen, a senior at Greenville High School and the lieutenant governor of the Ohio District Key Club. She attended her first meeting with club members this past Monday.

“The Greenville Kiwanis Club challenged the county board three years ago to do something in the community to celebrate the county board,” Huston said. “We formed May 6, 2016, starting with at-risk youth, working with 12 local agencies to support kids. It was a huge success.”

Huston and Pressly keep track of the hours of the Aktion Club members’ through their volunteer and service leadership activities, which last year totaled 1,785 hours.

Aktion Club is currently putting together a video to be entered into a nationwide contests for Kiwanis.

“We started this last year,” Huston said. “This year’s theme is ‘Serving The Children.’ Last year, we did a scrapbook and won first place in the international competition. It is on display at Greenville Public Library. This year we had the option of doing a video.”

Another highlight of the meeting was the presentation of certificates.

Gladys Heath was named Member of the Month for June, receiving a certificate and traveling trophy. It was noted that she attends all meetings and treats everyone with respect.

Richard Shafer is from Consumer Support Services in Greenville and loves Aktion Club and gets to the event by his provider Kayla Richards.

“I like the pizza party, people and prayer,” said Shafer, who gave the prayer at the beginning of the program on Monday.

“It’s rewarding to see the smiles on faces and meeting people receiving our things,” said Ploch, who likes to read to pre-school children.

The club’s motto is “Development has no disability” and its core values are character building, leadership, inclusiveness, caring and diversity.

Their biggest event and fundraiser, Fun Day, is set for Shelter House 4 in Greenville City Park an event for children and adults of all ages. The next club meeting will be from 10 to 11:30 a.m. Aug. 26, at the Ansonia Methodist Church.

This past Monday’s gathering featured a pizza meal, after they won $100 in a contest challenge in a county food drive. 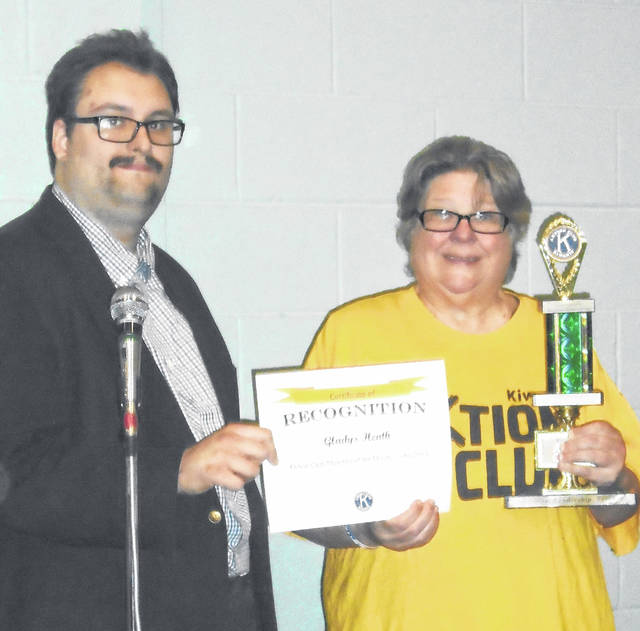 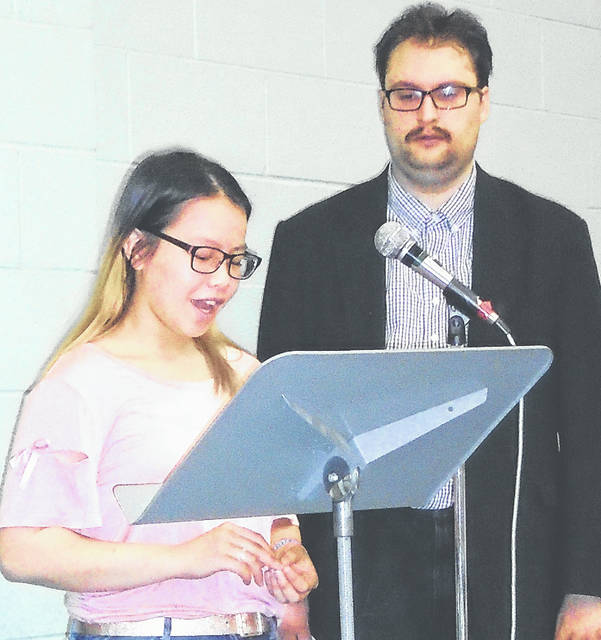