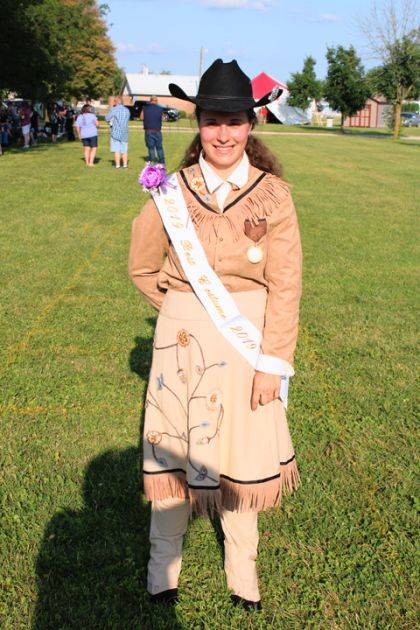 The daughter of Michelle Elliott and Mark Johnson, she wore an outfit her mother made her featuring embroidery that came from a pillow case. Elliott created the skirt and placed fringe she purchased to add to the attire.

“With the extra fabric from the skirt, she made my spats,” Miller said.

The teen said a friend, her mother and herself did some research on what Annie wore to get a concept of what they wanted her to wear.

She said she competed in the shooting competition in 2017.

“I got best costume then, too,” Miller said.

She said she was home-schooled, recently graduated and will be going to college to study entrepreneurship and political science.

In addition to winning the costume competition, Miller was among the finalists in the shooting contest for this year.

Eliminated during preliminaries Wednesday evening were: Alexa Miniard, 12, sponsored by Gregory Peck Sound and daughter of Kristina and Richard Robinson of Greenville; Emily Wenning, 16-year-old daughter of Jeff and Tammy Wenning of Arcanum and sponsored by Darke County Fish and Game Club; and Paige Brewer, 15, sponsored by Stairways to Wellness and Brewer Electrical Sales and Service and daughter of Tracy and James Brewer of Versailles.

Dennis Soward and his family are coordinators of the shooting contest, which this year featured more prize money for the winners.

Winners are solely selected on the basis of shooting ability. The even is hosted by the Annie Oakley Festival Committee and held at the Darke County Fairgrounds. 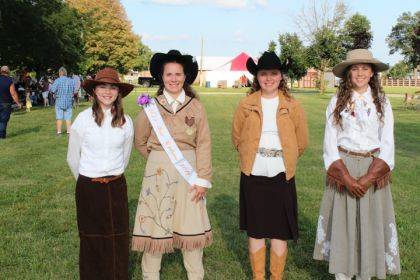