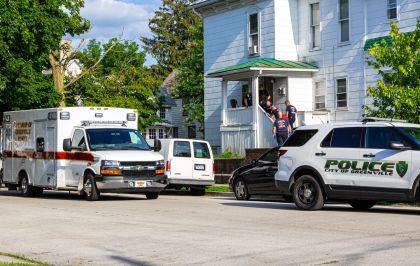 GREENVILLE – The Greenville Police Department is investigating a Thursday afternoon incident in which one subject was transported to the hospital after having to be tased. At approximately 6:15 p.m., emergency personnel from Greenville Township Rescue along with officers from the Greenville Police Department responded to the area of Washington Avenue and Cypress Street to the reports of an adult male naked and covered in blood walking the neighborhood. According to the Greenville Police Department, the suspect was located at 315 Cypress Street and was taken into custody after being tased twice in an attempt to force compliance after he became combative. The suspect, who has yet to be identified pending further investigation, was evaluated on the scene by Greenville Township Rescue before being transported to Wayne HealthCare for further treatment and evaluation.

Witnesses to the incident report that the suspect was seen in the street acting erratically talking to himself as well as yelling at passing motorists before the arrival of officers. “It’s a shame that this neighborhood has gotten to be like this,” stated one of the many bystanders watching the events unfold. “We have countless children who live around here and they shouldn’t have to grow up seeing these kinds of things. It’s getting to be way too common.”

Officers state that drugs and or alcohol are suspected to be a factor in the behavior of the subject. The incident will continue to remain under investigation by the Greenville Police Department.