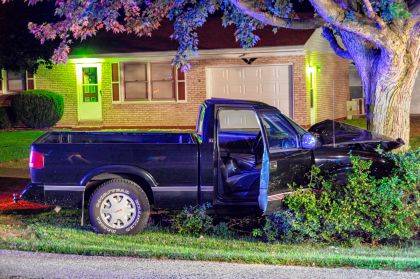 GREENVILLE – Darke County Deputies are investigating an early morning single-vehicle crash Friday that left the driver injured after hitting a tree head-on. At approximately 4:07 a.m., emergency personnel from Gettysburg Fire and Rescue along with deputies from the Darke County Sheriff’s Office responded to the 6200 block of Hartzell Road in regards to a single-vehicle crash unknown on injuries.

According to the Darke County Sheriff’s Department, a preliminary investigation into the incident revealed that a black 1995 GMC Sonoma, driven by 51-year-old Daniel Huffman of Greenville, was eastbound on Hartzell Road when he lost control of his vehicle traveling off the left side of the roadway striking a tree head-on before coming to rest in the front lawn of a private residence located at 6260 Hartzell Road. Huffman was treated on the scene by Gettysburg Rescue before being transported to Wayne HealthCare for minor injuries.

The incident is under investigation by the Darke County Sheriff’s Department.