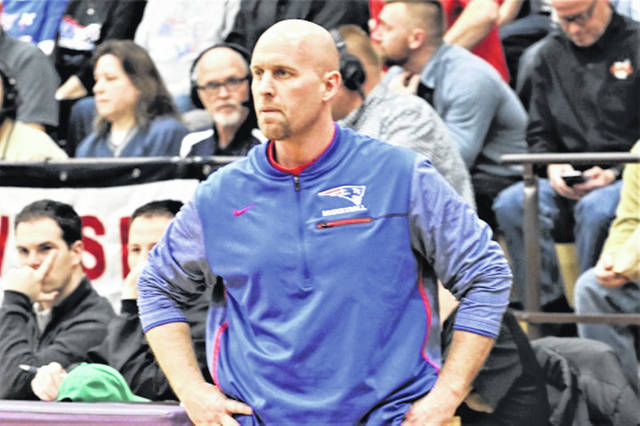 NEW MADISON – The Dean of Darke County athletic directors, Brad Gray took time to talk sports at the junior high and high school level from an AD’s perspective beginning with the many hours spent on the job, often taking time away from family.

“The administrative support that I have here is unbelievable,” said Gray. “Mr. Morris our principal has been a head coach, he has coached multiple sports prior to becoming a principal so he gets it. Obviously he understands the time demands, but he also is a family man with his own children and understands the demands of that and he is very helpful to me. He helps covers events when I can’t be here.”

“Same thing with Mr. Sagester our Superintendent,” Gray continued. “Obviously a longtime head coach who’s athletic mind and gets it has his own family so I have been very fortunate to be in a place where my direct supervisors are people who have been head coaches who also have their own families and understand that the time that has to go into being an AD is demanding.”

Gray not only is the Patriots athletic director but is the head coach of the very successful Lady Patriots basketball program and is assisted with his AD duties by site manager, Chris Pearson.

Chris covers a lot of our fall events for us,” noted Gray. “He really has to step up in the winter for me and cover events when our team is playing that night.”

“I have just been blessed to be in a place where if I say; ‘hey, my son has a youth basketball game tonight, I really need to be there for it, would you guys be able to cover,’ usually somebody steps up and covers,” Gray said. “Our elementary principle, Mr. Shane Mead even helps out. He does a great job of being here when we need him as well, so that’s been a good thing because I coach my younger kids’ teams.”

“I’ll be coaching my son’s youth football team this fall and I’ve coached his youth basketball team ever since he’s been playing, so I’m not just coaching at the high school level,” continued Gray. “I’m coaching my younger kids at the youth level as well so there’s a huge time demand but I wouldn’t have it any other way.

After more than 10 years of coaching and as the school’s AD, Coach Gray is passionate about helping kids become young adults.

One of the many responsibilities Gray must manage – making certain game day busses are scheduled and on time.

“It’s a collaborative effort,” noted Gray. “Jerry Hollinger is our transportation supervisor and obviously we have to make sure we get our trip tickets turned into him. He assigns the drivers, he sends me a conformation of everything he has. Basically it’s just me looking at it, a document on the computer, the day of the game, the week of the games. We double check everything, we always send out reminders the week of our upcoming events and make sure everybody is on the same page with bus departure time, who the bus driver is, things like that.”

The job of AD was not always as easy as it has become after more than 10 years in the position.

“If you would have asked me 10 years ago when I was first getting started as an AD, I would probably say things are hectic all the time and I feel like I am always being pulled in different directions,” said Gray, “but the more you do it, it becomes more routine. You have that checklist of things that you need to make sure that you have taken care of. It has definitely become much more of a routine.”

With the addition of a football program, much responsibilities were added to Coach Gray’s duties.

“The addition of football a few years ago was difficult,” noted Gray. “That was new for not just me but for our whole community, our faculty and staff. Everything was brand new. That was something we had to adjust to, but now that we have doing it for a few years it’s a little bit more of a well-oiled machine in terms of how it runs and what the expectations are.”

“Things get easier the longer you have done the position just like I’m sure with any job,” continued Gray. “You kind of get comfortable and know the ends and outs. Obviously there are always changes each year with guidelines from the OHSAA and different regulations that they might throw in.”

“There are always changes that keep you on your toes. You have to be ready for it, but when you have a good group of people around you, everybody works together, you all get along with each other and you are all willing to help each other out, it makes things a lot easier.”