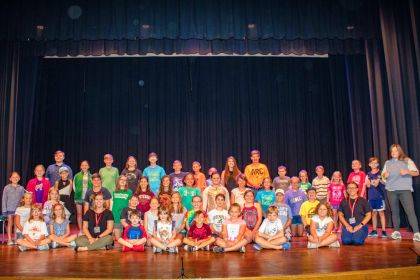 GREENVILLE – Darke County Center for the Arts will present two performances of Missoula Children Theatre’s production of Peter and Wendy starring local students at Henry St. Clair Memorial Hall on Saturday, August 3; the matinee starts at 3 p.m. and the evening show begins at 7 p.m. An original musical adaptation of the classic story of Peter Pan, the production will take audiences of all ages to Neverland and back in a fantastic adventure filled with humor and wisdom.

Following being cast during an open audition on Monday, July 29, the first- through 12th-grade students chosen for a role attend intense rehearsals where in one short week they learn lines, music, and choreography to create a fully realized musical theatre presentation that will charm adults and delight youngsters. Allie Tanner won the title role of Peter, while Evelyn Pieterzak will play Wendy; Peter’s shadow will be acted by Karr Stump. Wendy’s brothers Michael and John will be played by Christopher Brinley and Liam Jasenski, and Carter Qualls and Katherine Kauffman will play their parents, Mr. and Mrs. Darling. Madelaine Gantt will play the Darling’s housemaid Liza.

Those cast as one of the array of Neverland creatures are Eva Kramer as Croc, Andy Miller and James Williams as Kangaroo #1 and Kangaroo #2, Haylee Harling and Paul Todd as Ostrich #1 and Ostrich #2, and Lucy McDowell and Tate Richardson as Panda #1 and Panda #2. The ever-optimistic Clouds are played by Emma McDowell, Leland Henne, Gabby Browning, Pacey Miller, and Tucker Browning; Isabel Costa has the role of Stormy.

Phebe Todd was chosen as an Assistant Director for the show. The accompanist for the performance is Mary Alice Newbauer. MCT Actor/Director Britini D’Angelo will play Captain Hook’s right-hand man Smee in the production; Hannah Chism is the other MCT Director in charge of the week-long theatre residency.

Tickets for the performance of MCT’s Peter and Wendy are $5, and will be available at the door prior to the performances. For more information, visit DCCA’s Website at www.darkecountyarts.org or contact DCCA at 937-547-0908.