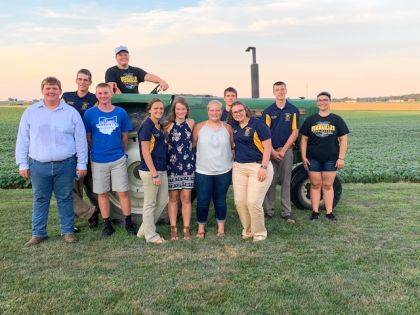 VERSAILLES – On July 18, the Versailles FFA assisted with the Farm Mass that was held at LineView Farms owned and operated by Doug and Brenda Schmitmeyer. The Versailles FFA assisted by helping park cars, setting up chairs, passing out programs, cleaning up after the mass, carrying chars for individuals and helping package and pass out soil and water that had been blessed.

The mass was celebrated by Reverend Joseph Binzer. Versailles FFA members that assisted with the event were Deanna Hesson, Luke Billenstein, Noah Barga, Laura Wuebker, Cayla Batten, Nicholas Didier, Caleb Smith, Emily Delzeith, Wesley Gehret, Shelbie and Renea Schmitmeyer. Special congratulations to Joe and Joan Borchers of Versailles who were recognized as one of the Century Farm award recipients. The Versailles FFA thanks Doug and Brenda Schmitmeyer for hosting the Farm Mass and asking the Versailles FFA to participate.