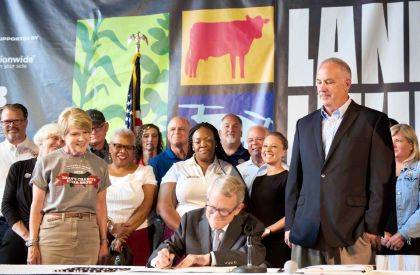 COLUMBUS – State Senator Steve Huffman (R-Tipp City) joined Governor DeWine and Ohio’s Director of Agriculture Dorothy Pelanda for the signing of Senate Bill 57, his legislation that clarifies that hemp and hemp derived products, including CBD oil may be sold legally in Ohio.

The new law will create an industrial hemp program in Ohio administered by the Department of Agriculture and includes an emergency measure allowing stores and consumers to legally buy and sell CBD products effective immediately.

“This is an incredible opportunity for our farmers to help diversify their crops by allowing them to grow legal hemp,” said Huffman. “I am excited to see how this new law will benefit the agriculture industry as well as consumers in the years to come.”

With the recent passing of the 2018 Federal Farm Bill, industrial hemp has been removed from the list of scheduled substances banned by the federal government and can now be grown as a commodity crop throughout the United States.

Many states have adopted a hemp pilot program, permitted by federal law, so that farmers in their jurisdictions could begin planting and harvesting hemp. Hemp can be used in over 25,000 commercial products including feed, fiber, biofuels, clothing and plastic.

Federal law prohibits a person from growing hemp if they have had a felony drug conviction in the last 10 years.