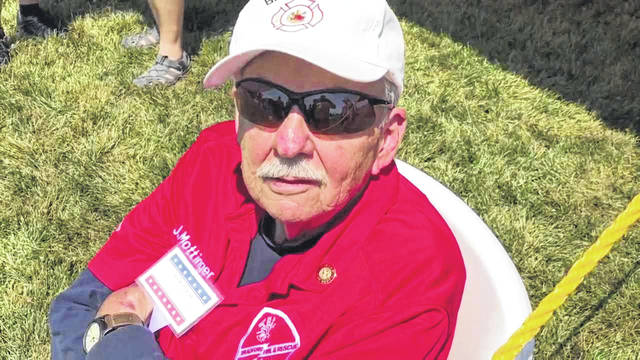 BRADFORD — “I like longevity,” said Jan Mottinger, chief of Bradford Fire and Rescue Services Inc. several days after he was honored at the 2019 convention of the Central Western Fireman’s Association in Pleasant Hill.

Chief for 28 years, he has been involved with the Bradford Fire Department 54 years, having joined in August 1965 after being approached by a friend.

Mottinger was singled out and honored by members of the Central Western Firemen’s Association, during their recent, annual business meeting in Pleasant Hill “as the oldest, still active firefighter.”

The 81-year-old is also an elected official, serving as clerk of courts for Miami County Common Pleas Court, Miami County Municipal Court, Court of Appeals and the Auto Title Department.

The fire department in Bradford has 28 firefighters and there are 40 personnel in EMS.

“My most memorable fire was the lumber building fire,” he said.

Mottinger, a certified fire safety inspector and fire service instructor for Ohio, said he isn’t in too many organizations any more. A member of the Masons and Shriners, he is on the board of directors for Miami County American Automobile Association Auto Club, Piqua and Troy, and has been secretary and trustee of the Bradford Community Improvement since 1982.

Born Jan. 8, 1938 in Bradford, he is the son of William Andrew and Janis Annebel (Mohler) Mottinger. He graduated in 1956 from Bradford High School and studied certified management courses at Wittenberg University from 1972-74.

He also has been with a trustee of the Dettmer Hospital Foundation, Troy, since 1983; served with United States Army, 1956-59; was on the Ohio Clerk of Courts Association (district chairman 1980, legislation committee since 1980); and Ohio Mayors Association (first vice president 1975-76).