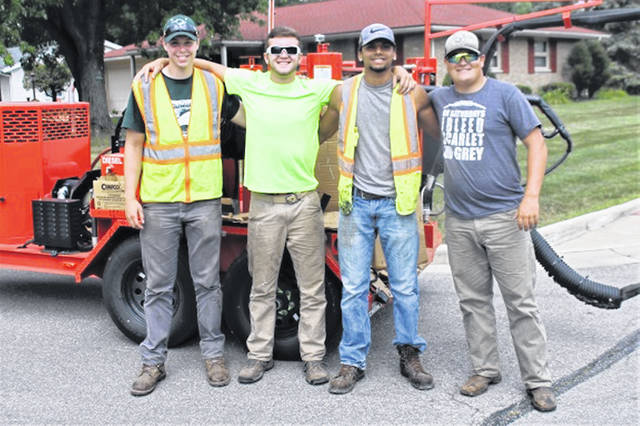 “I like it a lot,” said Kyle Mills, a former starter on the Wave baseball and basketball teams and a recent member of the Wright State Lake Campus baseball team. “I mostly work with the crack filling crew. I learn a lot from being here.”

Former GHS starting quarterback and Green Wave starting pitcher, now pitching for Mount Vernon Nazarene University is pleased to have a summer job that helps with college expenses before returning to college in the fall.

“It’s a lot of fun working with my former teammates,” said Paulus. “I do a lot of random things. I was on the mowing crew for the start of the summer then I sub in on the crack sealing team – just whatever they tell me to do. It helps pay for books and whatnot at school.”

Peter Pandy, a starter for the Greenville basketball and baseball teams enjoys his work with the street crack filling crew. Pandy played basketball for Indiana University East in Richmond, IN and will be attending the University of Cincinnati this fall.

“It gets hot especially in the summer obviously – our crack fill truck doesn’t have air conditioning,” noted Pandy. “Sometimes it’s hard during traffic. Some people are in a rush and you just have to make the best of it.”

“I have a bunch of my buddies yelling at me and waving,” Pandy said of his experiences on the job. “They will drive by a just yell; ‘what’s up, hey how’s it going,’ and I just wave back to them – that’s cool. It is just nice working outside and get a nice tan.”

“It is fun,” said Nathan Fry, a former starting lineman for the Wave football team. “I have been lifelong friends with all of the guys I work with. It’s always fun to go to work every day and get to hang out with your friends on a nice hot day.”

“We get a lot of nice people waving and yelling at us,” continued Fry. “We were out here on Gardenwood a couple weeks ago and some nice lady just walked out of her house and handed us bottled water. That kind of stuff is what’s nice. It’s nice to know that there are people out there know you’re just doing your job and don’t want to give you a hard time.”

Greenville Athletic Director, Aaron Shaffer is pleased while not surprised by the excellent performance of the former Greenville athletes.

“The young men that work for the city street department have come through our athletic programs,” said Shaffer. “We’re confident when those young men go out into the workforce, they know how to work hard and they know a work ethic and discipline. They are Greenville kids that understand it is an opportunity to make a little money, but also give back to their community that has given them so much.” 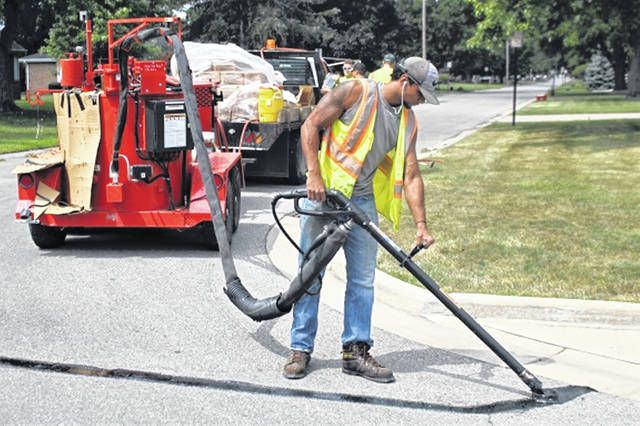