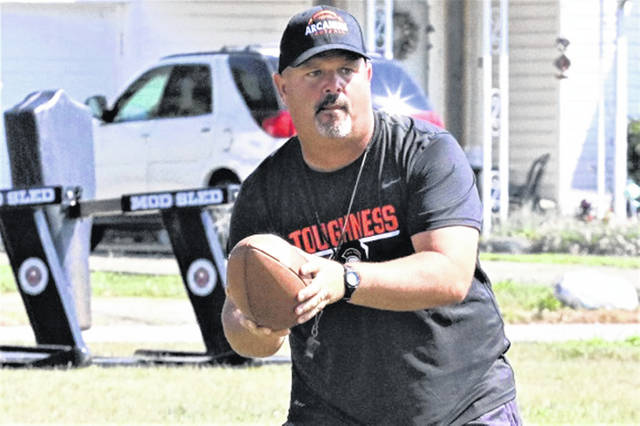 “This is the time of year you learn to grow together and you become tighter as a family,” said Schondelmyer. “You learn to trust the group and trust each other. This is a great time of year kids are out and its football – its football season. We have Coach Couch (offensive and defensive line coach) here leading us in a little Trojans jacks, so there is a lot of energy with the kids.”

The veteran Arcanum coach understands the responsibility of teaching more than just the X’s and O’s of the game.”

“Football teaches life lessons – that’s what it is,” noted Schondelmyer. “I think people lose sight of that. People get caught up in other areas of it, but this is what it’s about. I think it is so important now days, kids learning how to when you get knocked on the ground, learning how to get back up.”

“I just had a talk with the team this morning about adversity,” Schondelmyer continued. “I said the true mark of a man is when things are going bad – how do you respond. That is what football teaches you. It’s not all going to be a great experience at times. There is going to be some very hard times and that develops character. I believe that’s what young men need. They still need that today. They need to be somebody who when times are tough are going to step up and be a leader and that’s what we are looking for.”

Coach Schondelmyer is quick to point out the relationships built on the football field building a fraternity lasting a lifetime.

“With football, guys 10-15 even 20 years and more removed, you go to your class reunions, it’s the football guys, they all come together,” stated Schondelmyer. “You find a guy, for instance, our coach who lost his house in the tornado in Brookville. It was our group of guys that coached with him and have played with him that came out of nowhere.”

“We’re driving from all over parts of Ohio to help out and that’s what football is – it is family,” Schondelmyer added. “We just don’t talk about it, we actually do it. We’re here to help you after you graduate and we want you to become an outstanding citizen once you leave our program.”

“Greg Hale is out here coaching too,” concluded Coach Schondelmyer. “He’s fighting cancer seven years now. He’s been fighting cancer and he’s over there in his truck right now. Once again, the family thing. He’s going to be watching practice from the truck, so we’re glad to have Coach Hale – great guy.”