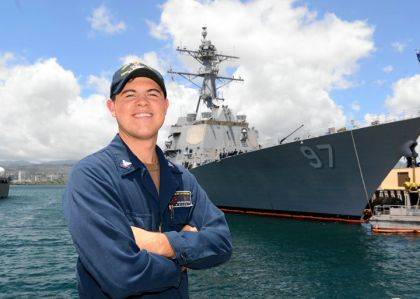 JOINT BASE PEARL HARBOR-HICKAM, Hawaii – A 2016 Greenville Senior High School graduate and Greenville native is serving in the U.S. Navy aboard the guided-missile destroyer, USS Halsey.

Sykes credits success in the Navy to many of the lessons learned in Greenville.

“One thing I learned from my dad while we worked on the farm was that you don’t quit until the job is done,” said Sykes. “I apply that to everything I do in the Navy.”

Halsey measures approximately 500 feet and is powered by four gas turbines that allow the destroyer to achieve more than 30 mph in open seas.

Approximately 30 officers and 300 enlisted men and women make up the ship’s company. Their jobs are highly specialized and keep each part of the cruiser running smoothly, according to Navy officials. The jobs range from maintaining engines and handling weaponry to washing dishes and preparing meals.

As a Navy electrician’s mate, Sykes is responsible for ensuring all electrical equipment is operational so the Halsey is always fit to fight.

Being stationed in Pearl Harbor, often referred to as the gateway to the Pacific in defense circles, means Sykes is serving in a part of the world taking on a new importance in America’s focus on rebuilding military readiness, strengthening alliances, and reforming business practices in support of the National Defense Strategy.

“Our priorities center on people, capabilities and processes, and will be achieved by our focus on speed, value, results and partnerships,” said Secretary of the Navy Richard V. Spencer. “Readiness, lethality and modernization are the requirements driving these priorities.”

Serving in the Navy is a continuing tradition of military service for Sykes, who has military ties with family members who have previously served. Sykes is honored to carry on that family tradition.

“I am the third generation of my family to join the Navy,” said Sykes. “As a kid I always wanted to be like my dad and carry on the tradition.”

Though there are many ways for sailors to earn distinction in their command, community, and career, Sykes is most proud of earning a Navy and Marine Corps Achievement Medal within the first six months of being on board the USS Halsey.

“I received the award while I was deployed for fixing an important piece of equipment that helps to bring supplies onto the ship so we can stay out at sea,” said Sykes.

As a member of one of the U.S. Navy’s most relied upon assets, Sykes and other sailors know they are part of a legacy that will last beyond their lifetimes, one that will provide a critical component of the Navy the nation needs.

“I love serving on the Halsey because we are like one big family,” added Sykes. “Serving in the military really means a lot to me. When you have a kid walk up to you and tell you they want to be like you one day, it puts the biggest smile on your face and makes me love what I do every day.”