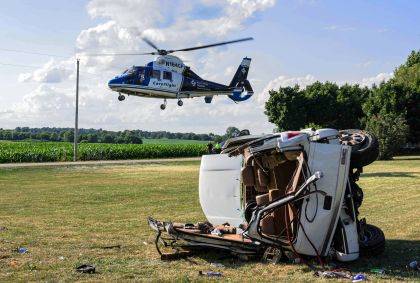 NEW MADISON — Authorities requested the aid of both CareFlight and MedFlight Tuesday evening at the scene of a rollover crash on the outskirts of New Madison.

At approximately 5:29 p.m., emergency personnel from the New Madison Fire Department, Tri-Village Rescue and Arcanum Rescue responded along with Deputies from the Darke County Sheriff’s Office to the intersection of New Madison-Coletown and Hollansburg Arcanum Roads on a two-vehicle injury crash with entrapment.

According to the Darke County Sheriff’s Department, a preliminary investigation into the incident has revealed that a silver GMC Acadia driven by Christopher Hurd 20, of Palestine, was traveling northbound on New Madison-Coletown Road when the driver failed to notice and yield to oncoming traffic after stopping at the posted stop sign. Hurd pulled into the path of a white GMC Jimmy driven b Dustin Yount, 35, of Greenville, traveling eastbound on Hollansburg Arcanum Road striking the Jimmy on the passenger side of the vehicle causing it to roll before coming to rest on its side off the roadway near the front lawn of a private residence located at 2520 Hollansburg Arcanum Road.

Yount had to be extricated mechanically by the New Madison Fire Department. His nine-year-old son, Hunter Yount, was helped out of the vehicle by Hurd.

The Younts were flown from the scene by two separate medical helicopters. Hunter Yount was treated on the scene by Tri-Village Rescue before being transferred to a landing zone at the Tri-Village Rescue station to be transported by MedFlight to Dayton Children’s Hospital where his condition remains unknown. Dustin Young was treated by Tri-Village and Arcanum Rescue for his injuries before being transported from the scene by CareFlight to Miami Valley Hospital where his condition also remains unknown.

Hurd was treated on the scene by Tri-Village Rescue for minor injuries and transported to Wayne HealthCare for further treatment and evaluation.

Hurd was issued a citation for failure to yield from a stop sign.