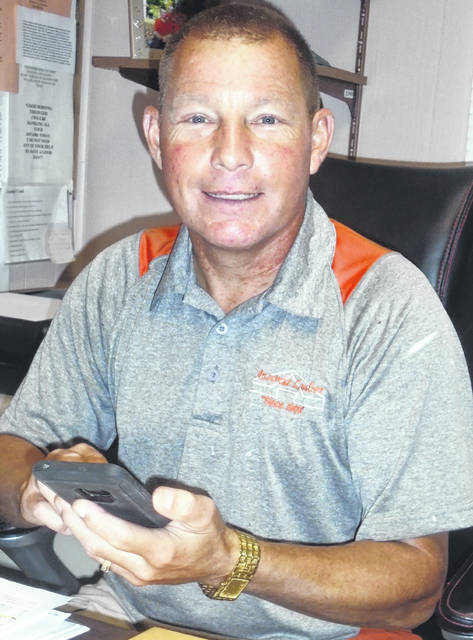 UNION CITY, Ind. — Tony Spence, the chief operating officer at Ansonia Lumber Co., was diagnosed with juvenile diabetes at the age of 2 and lived with it until other health issues started going awry.

“Three years ago, diabetes had taken its toll on Tony,” said his wife, the former Krista Klipstine, whom he married nearly 21 years ago. “It’s not that Tony didn’t take good care of himself, but after fighting the disease for over 50 years, the body can only take so much. Tony’s sugar began to drop quickly often without warning. One day, his sugar bottomed out while driving, and he nearly hit a Wiley Drilling truck head-on, only to travel off the road and strike a pole, totaling his van.”

She said that oftentimes, almost nightly, his sugar would get too low.

“It was always a struggle and one night he woke up disoriented and fell through a two-story window,” she said. “Thankfully, the blinds stopped him from falling to the ground.”

His kidneys subsequently went to stage 2 renal failure and the doctors told him they were seeing signs of the toll the disease was taking on his other organs, concluding that if he didn’t have a transplant, his organs would fail or he’d accidentally kill himself or someone else.

“It’s not without a trade,” Krista said. “They said he’d be closing the door to one set of problems and opening the door to a new set, that’s why they wait until deemed absolutely necessary for a transplant. We were told the wait time would be approximately a year. I can’t begin to express what it’s like waiting on a phone call like that because you know when the time comes, it’s because someone else lost their life.”

So the Spences decided to start praying for the family of the future donor.

“Within weeks, Tony received a phone call to report to the hospital asap. They had a donor,” she said. “The surgeon told Tony he’s extremely picky on received organs and has to pass lots of testing and was likely going to be sent home because oftentimes the organ isn’t good enough. He said he won’t put a cheap make and model in, it has to be at least a Honda! After several hours, the surgeon said that this pancreas was absolutely perfect. He said it’s much better than a Honda!”

Now, Tony’s no longer diabetic. He is, however, limited to such things as carbonated water, caffeine and pomegranate as they counteract his medications.

He said it took some time to get used to the fact that he no longer has diabetes.

“Juvenile diabetes is treatable; it’s mind over matter,” said Tony, who turned 54 on July 20. “I grew up with it, so I knew what to eat.”

The son of Steve and Judy Spence is the middle of three sons, and he and Krista are the parents of four sons, Trevor, Tanner, Trendon, and Treyton.”

“Fortunately, our sons are not affected (by diabetes),” he said. “We tell them to keep active and watch what they are eating. They’re all athletic.”

Spence said he doesn’t feel any different since the transplant, only that he has more energy.

On Sept. 6, the Spence couple was invited to attend a small festival at Oak Park in Kettering on the third anniversary of Jessica Combs’ son, 16-year-old Ronnie Bowers’ death. He was the former Darke County boy who was murdered in Dayton and was Spence’s pancreatic donor. Also invited to that celebration were other organ donor recipients of Ronnie.

Additional information on that event will appear in the weekend edition of The Early Bird.