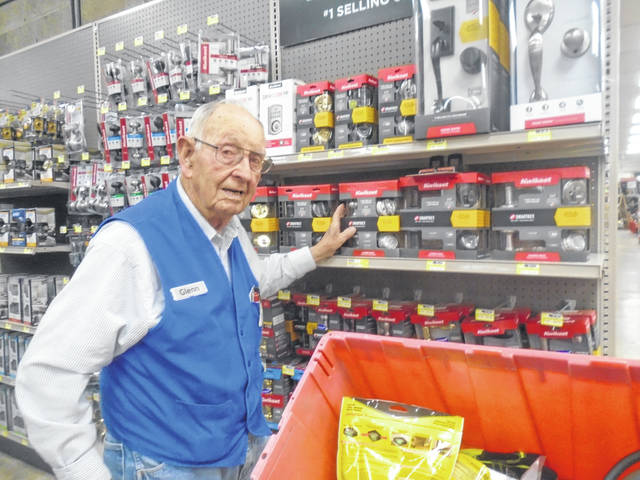 ARCANUM — Howard “Glenn” Eley has been selected by the Arcanum Business Association to serve as grand marshal of the third annual Christmas in the Village and Horse Parade in Arcanum, which takes place Dec. 14.

The World War II veteran celebrated his 99th birthday on June 21 and still goes to work three days a week without fail at Orme Hardware.

“I work Monday, Wednesday and Friday half days from 8 a.m. to 1 p.m.,” he said. “I will be there 26 years the middle of next month. My health is good, but my legs need support to get around.”

And he gets that support by using a shopping cart to stock the shelves at the hardware store. In addition, he waits on some customers, getting them whatever they need.

When he first began working there, it was Arcanum Hardware, owned by Paul and Eldon Erdmann.

“I worked full-time until my age caught up with me,” Eley said. “After I quit going to Florida, I had to have something to do so I came back to the hardware store. That was in December 1993.”

His wife, Helen (Goins), died in August 2014, and was the mother of his three sons, Larry of Arcnum, Terry of Greenville and Eleta Baughman of Lewisburg. There are 10 grandchildren and 15 great-grandchildren.

Eley said he graduated from eighth grade at the one-room Mt. Summit School on Grubbs-Rex Road. He then attended Arcanum High School until his sophomore year.

During his military days from October 1942 to April 1945, he was a member of the 1200 Division Armor, and served in Germany.

He is a life member of both the West Manchester American Legion and the West Sonora VFW.

“I always went by Glenn until Uncle Sam wanted my full name,” said the son of the late Frank and Bertha (Howard) Eley.

He said in the spring of 1927, his family moved to the Savona area. He met his wife on a double date with his brother and his girlfriend at the time.

“That was in January 1940,” he said. “I then never went with anybody else. We had our 70th anniversary in 2014 in February and she passed away in August.”

He said he was in the military when he got married.

“I was sent to Abilene, Texas, to Fort Thomas to vehicle school and I had made arrangements to come home over a weekend,” Eley said. “We got our license one weekend and were married the next weekend. I caught the noon training in Louisville and got into Dayton at 6 p.m. We went to a pastor’s apartment at the Bonebridge Seminary.”

He is the eldest of seven children with only two sisters, Elsie Rayburg and Mildred Hoover, living.

How does he feel about being named grand marshal?

“Great. It was a big surprise,” he said. “I don’t know why you have to get old to be popular. They had me at the Round Table at the Historical Society.”

One of his greatest pleasures, he said, is when his friend, Chase Weaver of Eaton, takes him riding in a World War II Jeep that Weaver restored.

“He has hauled me in it the last two birthdays and through the Annie Oakley Parade and the Pork Festival Parade,” Eley said. “On my birthday, he hauls me out and around here and there. I drove a Jeep from the time I went into the service until I came out. I was assigned to batallion commander. I was on limited service.”

He said the first time he was to go into the service, he was turned down. That was in March 1942 and then, in October that year, they sent him to Fort Thomas.

“I was in the last bunch from Darke County to go in when they started calling up the 20-year-olds,” he said. “I was 22 and drafted.”

Before he went to service, he helped a farming couple from January 1937 to October 1942. After the military, he said he became “a jack of all trades.”

“I first drove a gas and fuel route for 20 years; first for Ora Hickman in Arcanum and second for Union 76 out of Gordon,” he recalled. “I farmed for eight years and that got the best of me, and I ended up coming to the hardware store. I come in every day that’s possible. Last winter I was laid up for six months, spending February through November at the Brethren Community Community. I feel good now.”

He said this will actually be his first year attending the village Christmas parade, as he was laid up the other two times.

He’s sure he’s going to enjoy it.

“I was born and raised around horses,” he said. “I think I was born with a pair of overalls. I skipped school lots of times in the spring to take Dad’s place in plowing. We hand plowed and I walked behind it. I loved that more than school.”

The Christmas in the Village and Horse Parade is set on Dec. 14 is from 11 a.m. to 8 p.m. at 310 N. Main St., with a variety of activities for the family, and the parade will begin at 7 p.m. to officially welcome Santa to the village of Arcanum.

The parade will feature more than 50 horse and carriages, wagons, ponies, individual riders and motorized vehicles all decorated with festive Christmas lights.

The parade will travel from the baseball diamonds on Sycamore Street, to George Street and to Main Street in Arcanum. Ivestor Park has been decorated by several volunteers, local students from Arcanum, community organizations and local businesses with with more than 2,000 Christmas lights and decorations headed up by Chris Guilerman.

After the parade, the children will have the opportunity to visit with Santa in the Scout House. Also, horse and carriage rides will be available before and after the parade and will travel through the park and downtown area.