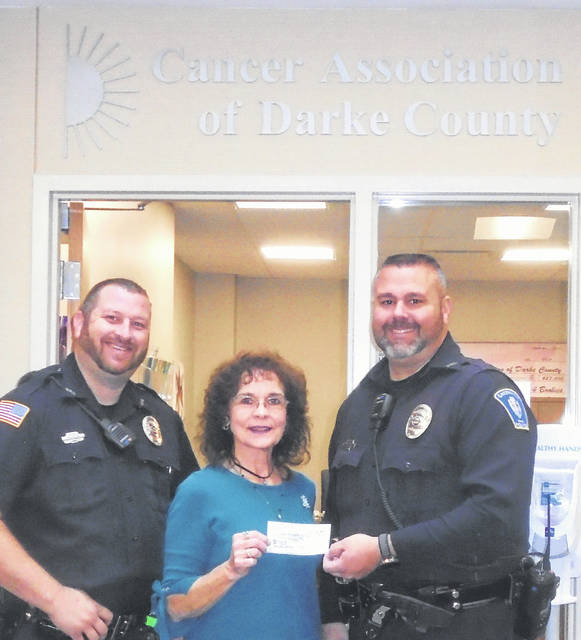 GREENVILLE — Greenville Police Department presented a $650 donation to the Cancer Association of Darke County (CADC) from its No Shave November fundraiser.

“We wanted the money to stay in Darke County,” said Fox. “I wanted to do this last year but I was behind on the eight-ball….late.”

He talked to Police Chief Steve Strick about it and Strick advised him he could hold the fundraiser this year. Fox then met with Strick and Lt. Eric Roberts in October and they gave their go-ahead. In fact, Roberts was one of the participants.

“Our policy is we have no facial hair but other agencies were doing it,” Fox said. “Several communities in the area are doing it and this is the first year for the Darke County Sheriff’s Department to do it. I visited with the Piqua Police Department’s chief and got their policy. They do it year-round.”

“We’ve got nothing but positive comments from everybody,” he said. “Next year, I will see if they will let us wear pink-shirts underneath our uniforms. People are doing it elsewhere and some are wearing pink badges, which are expensive.”

Fox said this was done through the Greenville Patrol Officers Association.

“Eleven of the men participated, and after a local chiropractor found out what we were doing, gave us a donation of $50. Our union then matched it.”

The facial hair, Fox noted, will be gone by Jan. 1.

“We’re going to continue this through December, though,” he announced.

Christine Lynn, executive director of the CADC, said the money will go into the general fund and be used for services they provide to local cancer patients.