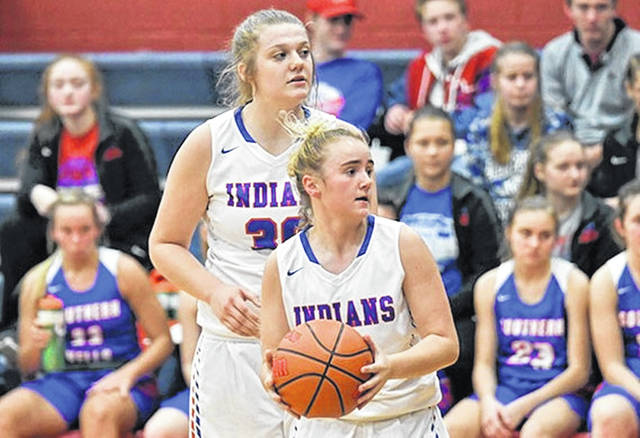 UNION CITY – The Union City Lady Indians improved to 5-2 on the season with a 58-53 win over the Monroe Central Lady Bears.

“It was a team effort with everyone contributing both on and off the bench,” said Union City coach Sarah Black. “This was a nice team win for us.”

Monroe Central took the opening period by a 12-9 score and the Lady Indians took the second quarter 17-15 to send the teams to the break with the Union City girls trailing by a point, 27-26.

Union City forged ahead in the third quarter adding 19-points to the board while holding the Lady Bears to 14-points with the Lady Indians holding a 45-41 advantage with one period to play.

Period No. 4 had the teams playing close with Union City 1-point better in the final quarter to get the 5-point win.

Lutz led the Lady Indians in scoring with 23-points, Claywell added 10, Green contributed 9 and Livingston chipped in with 8-points.

Mariah Claywell also had 6-assists and 6-steals for the Lady Indians, Livingston pulled down 6-rebounds.

A big pass from Livingston to Corona and free throws late by Claywell and Green sealed the lead for the Indians.

“We knew that playing Monroe Central would be a challenge for us and we would have to play together,” Coach Black said. “Everyone contributed to the victory and I saw a lot of nice things out of each player and the team overall. I can honestly say that I believe every girl had a very important play that helped us to come out on top.”

The Union City Lady Indians will be back in action on Saturday with a boy girl double header against Mississinawa Valley. The varsity will play at 6 p.m. and the JV at 7:30 p.m. All Union City, Indiana and Ohio first responders will be honored.