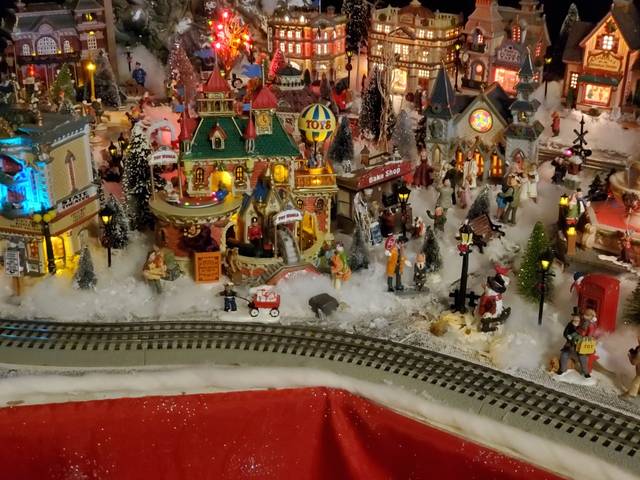 GREENVILLE — Tony and Becky Schultz have been exhibiting their collection of Christmas villages in their home west of Greenville since 2008.

“It all started when I bought a couple of the Victorian-style houses and some figurines, including a bride and groom, to surprise my wife the first Christmas after we were married,” he said. “Becky and I got married in 2005. After that, we just kept adding to it.”

“By this time, we had two new grandsons and we wanted to do something memorable for them,” he said. “We have 63 buildings which are all lighted and 11 animated features, such as the Ferris wheel, two hot-air balloon rides, a carousel, two lighthouses, and a working water fountain. We also have a Polar Express train that runs on a track over part of the display. It is set up to resemble how a real village might be laid out. The top north section is Santa’s workshop with elves putting up decorations and a lighted runway for the deer to take off into flight. It also has an entrance where would-be visitors are greeted by Anna, Elsa, Kristoff, Sven and Olaf. The top northwest section is dedicated to our family. There is a house for each one of our family members with corresponding figures including the family dogs. The top northeast part is the ‘adult’ section with a winery, Irish Pub and a tavern. Across the bridge from there is a cabin leading to a hunting scene.”

He said the lower level starts with municipal buildings at the west end.

“There is also a public park with a skating rink,” he said. “This progresses in front and back to other public places such as a ballroom, movie theater, toy shops, churches, bakeries, B&Bs and several other shops. In the center is the winter carnival with all the animated rides and several food and beverage kiosks. Moving east, there are two competing Christmas Tree farms as a nod to two of our nephews that run local landscaping businesses, Flory Landscaping and Spencer Landscaping.”

He went on, “After that, there is another public park and another ice skating rink. Behind that, there is the schoolhouse and a few other shops. To the east, is a large pond with boats, fishing shacks and the lighthouses. It ends with a large ski slope.

Schultz said throughout the display, the figures are grouped into various scenarios.

“There is an outdoor wedding scene, several snowball fights, a dog parade, a marching band, store merchants and customers, pictures with Santa, pony rides, a campfire, cars and horse-drawn carriages,” he explained. “Scattered throughout are random citizens, police officers, firemen, photographers, skiers, hikers, hunters and fishermen. I haven’t really ever counted how many animals such as dogs, raccoons, foxes, rabbits and deer there are. There are over 330 trees and over 265 figures.”

“Family is everything,” he said. “It takes a while to take in everything. Every time you look at it, you see something different.”

Tony said he built the frame in several sections that he keeps in a storage shed.

“I have to clean it all off before I bring it in and assemble it,” he said. “The whole thing measures 4 1/2 feet at its widest and is 25 feet long. Each building, every illuminated tree and every lighted feature all have to have the adapters dropped through the bases to be plugged in. Once that is done, we can set up the buildings then Becky can work her magic decorating. With both of us working on it, it takes about three to four days to complete.”

She still works full-time at the Brethren at the Brethren Retirement Community, but he is retired now after 21 years with Lowe’s so he had a little more time to dedicate to it this year.

“As always, some of it can be very frustrating when it doesn’t come together just right,” he said. “It’s okay though. It is a labor of love and worth every minute of time that we put in to it. It’s been a wonderful tradition for our family and a great hobby for Becky and me. As for recommending it for others to do, I might advise them to know when to quit collecting but definitely go in the direction where it makes you and your family happy.” 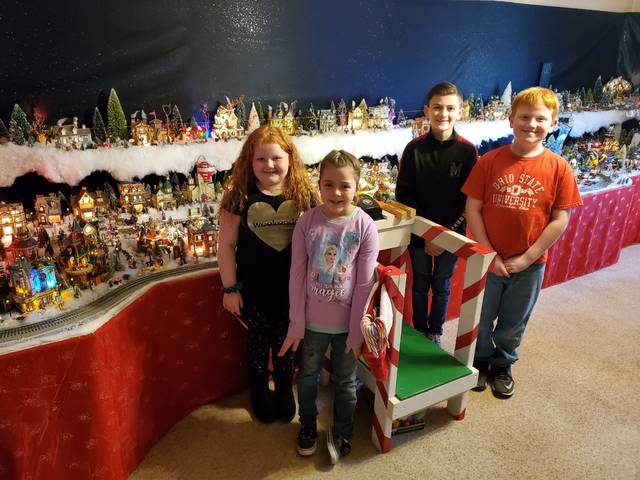