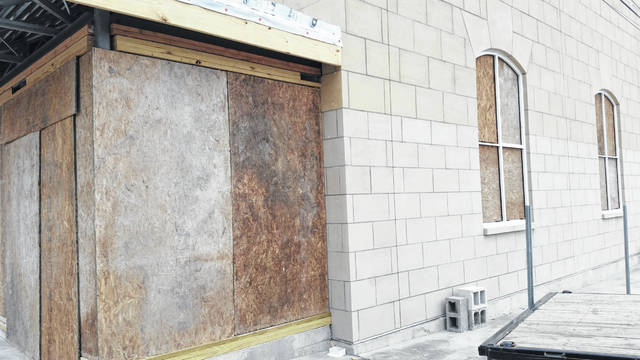 DARKE COUNTY – The new security entrance to the Darke County Courthouse has been delayed for about a month.

County Commissioners learned Wednesday from Arcon Builders that the addition is now slated to be completed by mid-January.

The original plan was to have the new back entrance open by mid-December.

According to Commissioner Matt Aultman, Arcon is waiting “for building materials to show up.” Aultman said some of the materials were “specialized” and with the holidays, there would be a delay in delivery.

“It should be done by the middle of January,” he said, noting after completion another couple weeks will be needed for inspection prior to the annex being open to the public.

The project, which began this past summer, includes the construction of a 1,000-square-foot annex at the rear entrance to the building. New features include bullet-proof glass and a holding cell to fit three prisoners, which was a request from Sheriff Toby Spencer.

When the annex is open, the front entrances to the courthouse will be permanently closed, and will be used only as emergency exits.

On Monday, Dec. 9, county commissioners approved a contract change with Arcon Builders to replace two painted metal prisoner’s benches to stainless steel at a cost of $1,989.50.

Commissioners also reported Monday that the current sidewalk at the southwest corner of the courthouse will remain in place, a savings of $724.50. They also approved additional hardware costs for the project at $271.89.