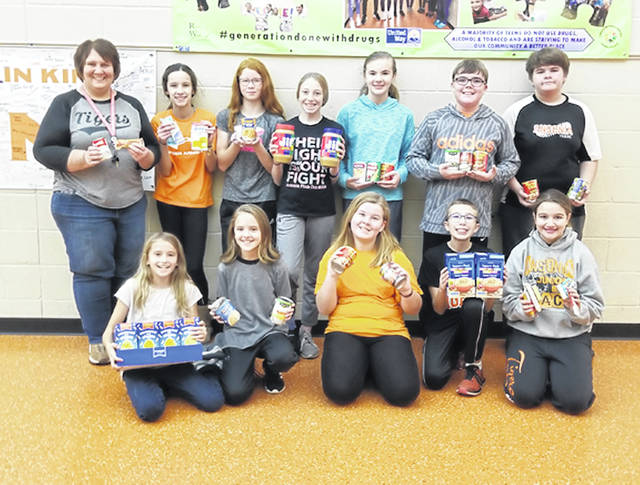 ANSONIA — Members of the School Safety Patrol showed their community pride at the closure of the school’s two-week food drive on Friday.

The group oversees the food drive and has a lot to be proud of with 1,645 food items collected, beating last year’s total by 375 donations.

Along with their adviser, Leslie Rhoades, also the school’s elementary music teacher, the students presented a few of the items collected, such as macaroni and cheese, peanut butter, and soup.

A little competition may have been the key to beating last year’s total, shared Rhoades, as two teachers, their classrooms side-by-side, competed to see who could collect more food. Combined, the two classes collected over 600 items.

“That really helped us out,” said Rhoades, showing that a little competition never hurts, at least not when going towards a good cause. As, later that day, the High School FFA students packed the donations for delivery to the Ansonia United Methodist Food Bank, which assists needy families in the community.

Rhoades was not sure how long the Safety Patrol has served as stewards for the school’s annual food drive, but what stands out is the overwhelming turnout and response from the students.

“They knew it was a good cause, and it was going to help our community,” said Rhoades.

The elementary Safety Patrol is sponsored by the AAA School Safety Patrol program, which boasts more than 654,000 Patrollers in thousands of schools across the country. The concept is to improve safety and reduce injuries in the school with participants taking on a leadership role.

Safety Patrollers may remind others not to run in hallways, help with class dismissal, and assist other students at crosswalks and onto school buses. Other duties and opportunities include the raising and lowering of the flag each day, to name but a few as Rhoades continues to expand the program.

“It works out well,” said Rhoades as students provide a positive influence to others. “They are seen by the other students when asking someone to do something or asking them to be quiet.”

This year marks 31 years for Rhoades as a teacher for the school and the third year as an adviser for the growing program after former gym teacher Rick Kies retired.