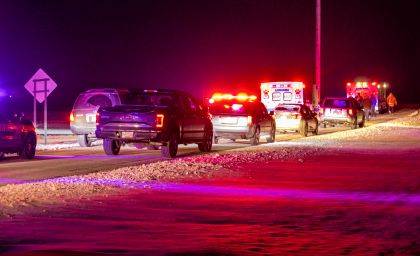 According to the Darke County Sheriff’s Department, a preliminary investigation into the incident revealed that a 1997 Red Ski-Doo snowmobile driven by Jonathan Gehret, 18, of Versailles, was traveling westbound through a field north of Washington Road. Gehret drove off the east side embankment of the North Fork Stillwater River and struck the west embankment.

Gehret was treated by Ansonia Rescue but was ultimately pronounced dead at the scene. There are no reports of other snowmobiles that may have been involved in the crash.

The Darke County Accident Reconstruction Team and the Darke County Coroner’s office were both requested to the scene to aid in the investigation of the crash.

In the second of two incidents, a Union City man suffered non-life threatening injuries after the snowmobile he was operating ran into a creek bed nearly six miles away from the original incident. At approximately 9:38 p.m. emergency personnel from the Ansonia Fire Department and Union City Rescue responded along with Darke County Sheriff’s Deputies to a snowmobile accident in the 11,100 block of Coletown Lightsville Road.

According to the Darke County Sheriff’s Department, a preliminary investigation into the second incident revealed a 1998 Yamaha snowmobile driven by Jacob Breymier, 24, of Union City, Ohio, was traveling eastbound through an open field. Breymeier drove off a creek embankment and struck the opposite side. Breymier was treated on the scene by Union City Rescue prior to being transported to Wayne Healthcare for facial and chest injuries.

Both incidents remain under investigation by the Darke County Sheriff’s Office.