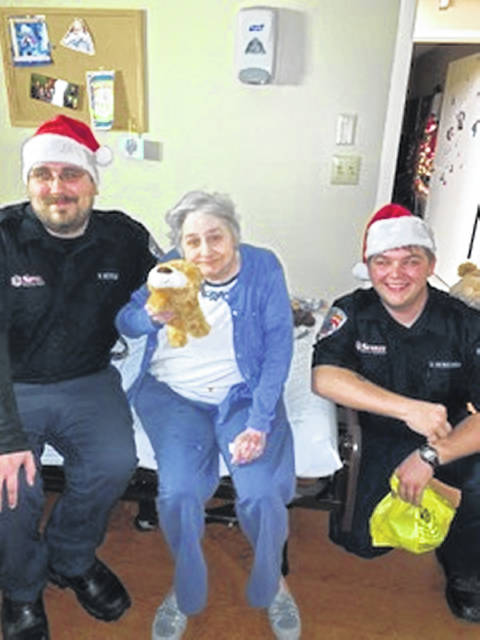 VAN WERT — When Ralph Griesdorn set out to work as an EMT for Spirit Medical Transport, LLC, on Christmas day, little did he realize the impact of his idea, spreading Christmas cheer, would have on nearly 200 people and their families.

After years of passing out slipper socks as a member of the Celina Eagle Riders, Griesdorn wanted to do something different, yet impactful, as he worked his shift Christmas day. With that thought in mind days before Christmas, the 24-year-old Mendon resident dug into his own pockets and went on a shopping excursion, all with the thought of bringing joy and peace to those who may be separated from their family or likely wouldn’t be traveling for Christmas.

When his shopping excursion was done, Griesdorn quickly learned that you can fit 338 stuffed animals in a 2015 Mitsubishi Mirage.

As Christmas morning came, Griesdorn, along with his partner, EMT Daniel Hittle of Greenville, loaded up the boxes of stuffed animals Griesdorn had purchased onto their ambulance cot and set out dressed in Santa hats for what would become the most personally gratifying day of their EMS career.

“There were boxes of stuffed animals from the floor to the roof and every crevice in between,” said Hittle of transferring Griesdorn’s carload of stuffed animals onto the ambulance cot. “I was super surprised when I came to work, and he told me what we were going to do. It was super impressive.”

Once the ambulance was stuffed with the animals, between taking EMS runs throughout the day, Griesdorn and Hittle stopped by both Van Wert Manor and Vancrest of Van Wert, passing out 197 stuffed animals to each resident of the facility.

“As we started passing them out, it was so neat to see all of the great smiles we were getting, not only from the patients, but from the nursing and facility staff along with families of patients who had visitors,” Griesdorn explained. “I don’t think I’ve ever gotten that many hugs in one day. It was just good to make sure all the patients at these nursing homes had a Merry Christmas. If I helped just make one person’s Christmas better, it was well worth it.”

Word about what Griesdorn and Hittle were doing quickly resulted in Facebook and other social media posts endorsing the EMTs’ good deeds.

“Initially I felt like I was leeching off some good karma, but it was cool seeing the people’s faces light up as we walked in,” Hittle said.

Because of run volume, Griesdorn said his hope of being able to pass out all 338 stuffed animals didn’t come to fruition…but there’s always next year, he maintained.

“I hope we can make it even bigger next year and hopefully it can become a tradition,” Griesdorn said. “I’m going to put out another challenge next year for all of my colleagues at Spirit to help me and hopefully we can touch the lives of thousands next year between all the counties our company covers.”

“EMS is more than a career, it’s a passion to serve God’s people,” Hathaway said. “I’m humbled by Ralph’s admiration and mission to make a difference in the lives of so many people, simply through his small token of kindness that touched so may hearts in such a big way. It’s great caregivers like Ralph and Dan, who dare to be different, that sets our EMS professionals apart from all the rest.”

Hathaway vows to work with Ralph in the coming year to help facilitate a way to ensure his desire to spread Christmas cheer next year stretches much farther than just two nursing facilities that were reached this past Christmas.

“As a family-owned and operated business, our patients and facility partners are the reason we exist. We have some things as a company planned in 2020 that will set the overall patient experience apart from other EMS providers. We are excited about this up and coming roll-out, and through Ralph’s charge, we will find a way to make next year’s Christmas day idea even bigger and better,” Hathaway concluded.