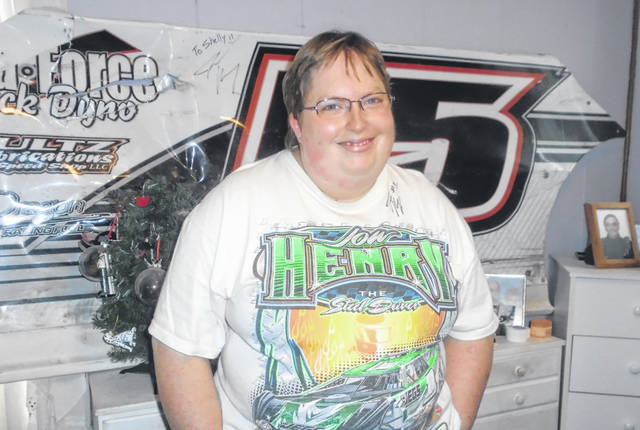 ANSONIA — Shelly Hoffman is sure hoping that 2020 brings her better health.

The 33-year-old has had her share of medical issues the past eight years, with such diagnoses as Crohn’s disease, Complex Regional Pain Syndrome and fibromyalgia.

However, she is no quitter. She still maintains her sense of humor, when she feeling at her best.

After the passing of her father, Ansonia Police Chief Larry Hoffman in 2008, life changed forever for the family, which includes her mother, Judy, and sister Amanda.

Judy said Shelly started complaining that her stomach was hurting in November 2011. After seeing a couple of doctors, she was told she had Crohn’s Disease, which had gone into her small and large intestines.

Subsequently, she was taken to surgery and 20 inches of the small intestine were removed. She was in the hospital for a total of five days. During that surgery, she hemorrhaged and it was learned that the Crohn’s was growing in and around the large intestine.

“They took everything out of her and put it back together,” Judy said.

Severe headaches started taking their toll on her in 2015, with doctors taking all kinds of tests. Doctors thought she had too much pressure on the eyes and thought she had produced too much spinal fluid so she was referred to a surgeon at Kettering, who did a spinal tap on March 26.

“It ended up they kept checking her eyes and putting in drops. but still couldn’t figure it out,” her mother said. “They sent her to a specialist on migraines at Ohio State, where 18 vials of blood were taken at the first appointment to make sure they wouldn’t miss anything. He tried her on different medications and told her she needed to start Botox shots in her head. “She got so sick, then they hooked her up to IVs because she was dehydrated.”

Shelly was then referred to a couple of doctors for pain management and got some gel for the pain on her back. .

Then, she was referred to a rheumatologist for fibromyalgia, rheumatism and arthritis and was put on three different steroids, which caused her to gain over 35 pounds.

At Beavercreek’s Ohio Pain Clinic, she started out on pain patches and was given shots in her joints. That’s when the fibromyalgia was diagnosed.

She had to then undergo iron infusions. she now ha blood work done every three months and be checked for deficiencies every six months.

On July 2014, she fell on the steps outside the house. She was originally told it was a a bad sprain to her foot, and later found out that it was broken.

“They couldn’t fix it until they took her off two of her medications,” Judy said. “Then, the fibromyalgia kicked in.”

Subsequently, at a rehab center, a cat scan was done, with the EMG designed to check the nerves in her legs, and that’s where the Complex Regional Pain Syndrome was diagnosed.

“On Oct. 22, her foot was starting to heal from July 4, and she was to go to physical therapy but couldn’t because her blood pressure and pulse rate were too high,” recalled her mother, the former Judy Mangen. “So, they tried water therapy which did help with healing. Shelly gets trigger injections with Ketamine infusions every eight to 10 weeks.”

To top that off, the whole family was affected when a carbon monoxide issue in their home sent them all to the hospital, with Shelly experiencing more issues than the other two.

Eventually, genetic testing was done and they were informed Shelly’s seratonin levels were off.

“One was eating the other one up,” Judy said. “Three or four of the medicines she was taking she wasn’t getting benefit from.”

Every three months, she gets her ears and sinuses cleaned, and now she does not take as many medications as she did before.

Shelly was able to work at a restaurant in Greenville and was let go because of the Crohn’s, and then was later rehired but found she couldn’t lift, push, pull hammer, or kick anything.

“She’s only 33 and will never feel anything but pain in life,” Judy said.