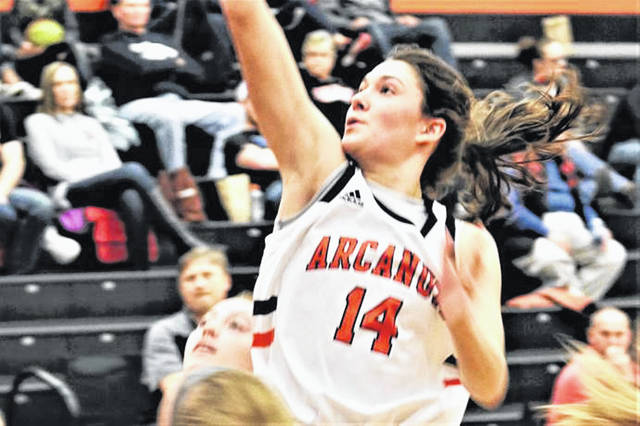 “We looked good athletically individually but at times we’re just not disciplined enough as a group,” said Arcanum coach Michael Dean. “We only scored 29-points the first half. I told them the points will come if they work together. They came out the second half and scored 47 – and they did that together.”

The Lady Trojans started slow with South taking a 3-0 lead before the Arcanum battled back to close out the opening quarter on a 12-0 run led with 5-points each from Madelyn Fearon and Hailey Unger and a Kyla O’Daniel field goal.

“We’ve just been starting slow,” said Dean. “The kids have to get moving together. There is a lot of talent there individually but it’s playing together as a team. We have to find ourselves a little quicker.”

Arcanum earned its first 20-point lead of the night, 27-7 at 3:06 in the second period and took the quarter by a 17-7 score with 5-points each from Unger and Elliana Sloan, both hitting a 3-pointer and a field goal sending the teams to the break with the Lady Trojans holding a 29-10 lead.

The Lady Trojans found their stride in the third putting 27-points on the board while holding the visitors to 5-points in the quarter. Gracie Garno and Unger each scored 6-points in the period on two baskets and 2-2 at line while O’Daniel and Taylor Gray both accounted for 5-points.

Megan McCanns chipped in 3-points and Sloan added a basket to round out third quarter Arcanum scoring sending the conference game to the final period with the Lady Trojans holding a 56-15 advantage.

“We played good defense the whole game,” Dean noted. “We feed off our defense and we have to realize that there are five girls on the court. We found it the second half but we have to start that way.”

“Elliana Sloan did a fantastic job coming in – she worked hard,” Coach Dean said of Sloan’s play off the bench. “I thought she sparked our team effort as a group and Gracie Garno coming back from an achilles strain – she looked good tonight.”

“I’m so happy that we also got back Meghan McCans back. She had surgery on her knee right before the first game of the season. This is her second game and she looked good. I couldn’t be happier with my bench girls.” we found ourselves there the second half and they played well the second half together and our defense showed it – that’s or thing

“All the girls worked hard,” continued Dean. “Taylor Gray continues to do well inside for us. She had four or five blocked shots and played strong. I give her credit because they had Mackenzie Neal who is averaging 10-rebounds a game and she only had a few. Not only does she have to fight for those rebounds but she has to deny those good players on the opposite side from getting to the board.”

“I was real happy how we ended,” Coach Dean concluded. “We have to find ourselves at the beginning now.”

Unger led Arcanum and all scorers with a game high 21-points.