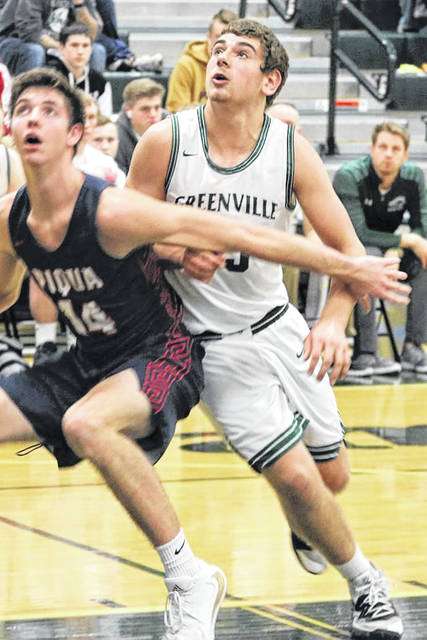 With less than one minute into the game, Greenville senior starter, Alec Fletcher went out of the game with an injury and did not return the remainder of the contest.

“Alec is one of our best players, he is one of the toughest guys I have ever coached,” Coach Joseph stated. “In whatever we play he is one of our most disruptive guys on the defense. We miss having him there and just some of the stability he brings to our team.”

Piqua took a 13-10 lead after an opening period and took period No. 2 by a 12-8 count to lead 25-18 with the teams headed to the halftime break. The Indians took advantage of five first half 3-pointers.

“We knew coming into it No. 1 (K. Darner) and No. 14 (G. Schurbb) are good players and good shooters from three,” noted Joseph. “It’s not that we wanted them to shoot but we also knew that we wanted to some degree make them make those shots and hats off to them, they made them.”

Greenville battled back in third quarter play outscoring the visitors 21-13 and get their first lead of the night, 39-38 with 04.2 seconds showing on the clock.

The visiting Indians went on a 6-0 run to open fourth quarter play to lead 44-39. Greenville once again battle back to close out scoring, topping Piqua 13-12 only to come up 4-points short in the loss.

“Our margin for error is small,” Coach Joseph said. “We have to make sure that not just in games but in practice that we are always aware that we have a very small margin for error to come out on top in these games, so we have to be that much more locked in every play of every game.”