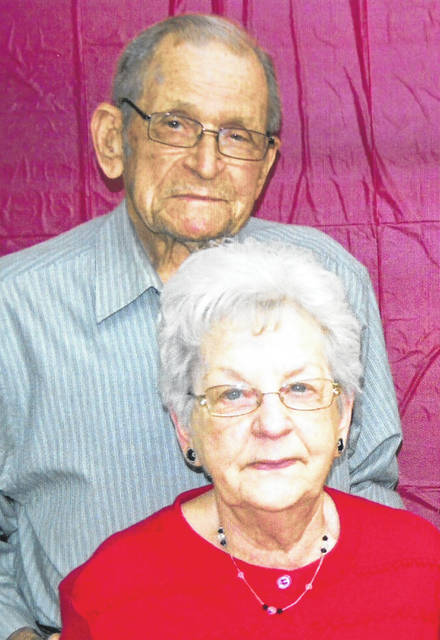 The couple had a simple wedding ceremony at the parsonage of the old Ansonia First Church of God by Rev. Davis in 1948. Her aunt and his friend served as witnesses.

The proud veteran and his new wife stayed in Ansonia and raised their family, which has grown today to three sons, seven grandchildren and 11 great-grandchildren.

They did not do anything special this anniversary, but noted that there was a party for them for their 50th wedding anniversary at their church, Rossburg United Methodist, where they have attended for 25 years.

Bob, the son of the late Herbert and Cecile Lee, served in the Armed Guard for nearly four years. Lee said when the war was over, the U.S. Navy did away with the Armed Guard. He came back in 1947, and subsequently became activated with the Ohio National Guard in Greenville.

“I stayed in the United States, training people for overseas duty,” said Lee, who came out of the military a master sergeant. “Training (cadre) was worse than fighting.”

His wife, the former Pat Long, had worked at various retail stores, including the Flood’s Store in Greenville, but the biggest part of her working career was spent as elementary secretary for Ansonia Local Schools.

After her husband returned home from the military, he worked in a body shop and was in a couple of supervisory positions in local factories, including Cadillac-Gage and New Idea in Coldwater. He said he also helped start a plant in New Madison.

The couple, who had met through mutual friends, are the parents of three sons, Nick and Rick, both of Ansonia, and Rob, who lives in Toledo.

In addition to being member of the Rossburg United Methodist Church with his wife, he is a member of the Ansonia American Legion and the Veterans of Foreign Wars.

When Pat was asked what she thinks keeps a marriage together today, she responded, “A lot of things are different today than it was when we got married. There are more things tearing couples apart nowadays. It takes a lot of cooperation between a couple. And, church helps. We have always been church-oriented. It helped us. We stick together and help each other.”

“I really don’t know why; maybe we thought it was a good way to start the new year. We didn’t have any celebration afterwards because my father was not very well,” said Pat, daughter of the late Virgil and Geraldine “Midge” Long.