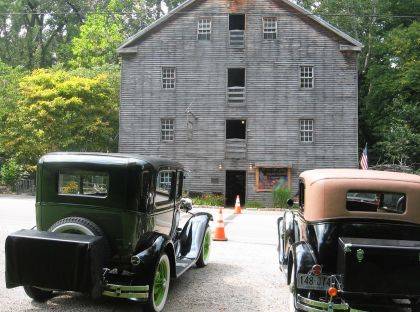 GREENVILLE – Since 1972, the Darke County Parks (DCP) has been actively adhering to its mission statement to acquire and preserve land areas possessing special natural and historical feature. They’ve also maintained these resources to benefit residents through appropriate educational and passive recreational programs and activities.

That mission could not have been more apparent than it has been over the last 25+ years. From the Nature Education Center at Shawnee Prairie to the Bish Discovery Center on Ohio Street, DCP has continually added to the menu of offerings and educational and recreational opportunities available. Much of the progress began with a 1/2 mil levy in the early 90’s that has been renewed and replaced a couple times.

Through grants, fundraising opportunities and the property tax, DCP has been able to build a log house, blacksmith shop and Sugarin’ Shack at Shawnee Prairie, council house and bowery at Prairie Ridge Meadow, open the Bish Discovery Center near Alice Bish Park, extended 13-miles of bike trails from Bradford to Greenville, and, most recently, added the Elaine Holzapfel Preserve behind the Greenville High School that will be used as an educational tool for the park district and high school.

To continue that progress, Roger Van Frank, DCP director, recently announced the DCP commission board is asking voters to approve an additional 1 mil, 10-year levy. The caveat, according to Frank, is that if the levy is approved DCP will stop collecting on the 1/2 mil levy. Ultimately, the owner of a $100,000 home would be asked to pay approximately $1.60 above their current tax rate each month, or a little less than $20 a year.

Van Frank agreed that even if you’ve never stepped foot on one of the DCP properties or haven’t attended an event hosted by the organization, you’ve probably been affected by the previous levy and will benefit from the new levy.

Under the original levy, DCP has given back over $800,000 to Darke County communities to support their parks. From playground equipment to benches and more, DCP has offered grants to the communities to help improve their local parks. All villages and the city of Greenville have been eligible to receive these funds. Van Frank expects this practice to continue if voters approve the new levy.

Van Frank was excited to announce DCP is not resting on its laurels and is currently looking to add to the district’s properties and educational opportunities. Throughout 2020 and into 2021, DCP will be working with the Friends of Bear’s Mill to make Bear’s Mill a new park in DCP’s ever-growing list of parks. Van Frank and the park commission believe this property fits in perfectly with the park’s mission. The 175-year-old mill needs thousands of dollars in repair and the Friends of Bear’s Mill are currently conducting a capital campaign. Early indications would have the Friends donating the land to DCP, but continuing to run the shop and many of its current events. Van Frank expressed a desire to keep the Clark family active in the operation of the mill, but would also like to hire one or two people to make sure the history and operation of the mill is preserved.

The park district has not had an increase in staff since 1993.

According to Van Frank, the Fort Jefferson is another park that could eventually find itself in the DCP family. The commission is also looking at possibilities for expansion of the bike trail and has heard from at least one village that would like the trail extended to that community.

Voters will see the 1-mil levy on the March 17 Primary Election ballot.