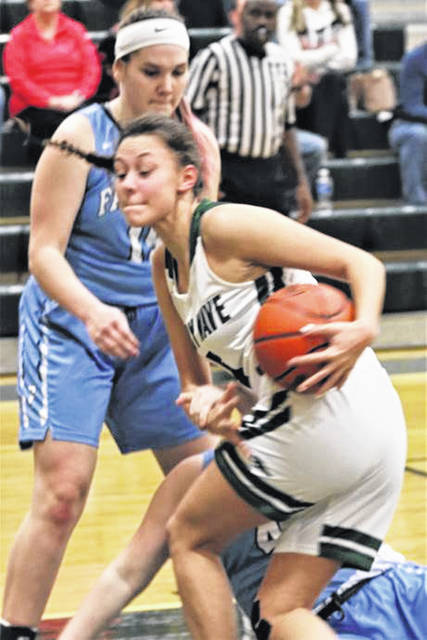 GREENVILLE – The Lady Wave battled back from an early 10-point first quarter deficit to defeat the visiting Fairborn Lady Skyhawks 65-56 in a Wednesday night MVL matchup.

“The way we started out I didn’t know how we were going to respond,” said Greenville coach Rachael Kerns. “I am so proud of their efforts because in years past if someone jumps us that way and the shots that we had weren’t falling we just pretty much folded up. There was no quit tonight, lots of fight and just a really solid team win.”

The Lady Skyhawks held a 13-3 lead over Greenville with 2:35 showing in the first quarter clock before the Lady Wave closed out first period play on a 9-3 run to trail 16-12 with one quarter in the book.

“We just talked about how No. 5 (Natalie Oktavec – third in MVL scoring with a 17.2 average) wasn’t getting any clean looks,” Kerns said of a quick called timeout. “We were doing that and 22 (Jodee Austin – 8.5 average) hit three 3’s in the first quarter, so once we made the adjustments and not let either of them get clean looks, they struggled to score from the outside.”

“We know we are always going to give a little but up because when you play a zone you’re going to give and take something,” continued Kerns. “We were going to make them earn it from the inside and we did a really good job taking away their two big offensive threats.”

Haleigh Behnken led the Greenville first quarter comeback with 8-points including a trey to go along with a Morgan Gilbert 3-pointer and an Annie Hayes free throw.

The team’s would trade baskets to close out first half play with the Greenville girls taking the second quarter 16-8 sending the teams to the break with the Lady Wave leading 28-24.

The Lady Wave took advantage of 10 Behnken third quarter points including two 3-pointers to extend their lead to 43-34 with one period to play.

A Grace Shaffer baseline 3-pointer at 1:55 in the third gave the Lady Wave a double digit 41-31 advantage while taking advantage of 10 Behnken third quarter points including two 3-pointer pushing Greenville’s lead to 43-34 with one period to play.

“Grace Shaffer came in and hit two really big 3’s today,” said Kerns. “Appreciate her understanding the role that she had. She is a really solid – a really good teammate.”

Period No. 4 proved to be a very physically foul plagued final period with Fairborn connecting on 6-of-8, free throws only to be outdone by the Lady Wave blistering the nets on 16-of-19 free throws good for an 84-percent fourth quarter performance at the charity stripe. Gilbert was 8-10, Behnken 6-7 and Fletcher 2-2.

The Lady Skyhawks’s aggressive play made it an 8-point 53-45 game at 2:21 in final quarter and the Lady Wave’s senior floor leader, Morgan Gilbert on the bench with four fouls.

“Morgan is kind of our rock on the offensive end,” said Kerns. “She finds a way to get it to Haleigh where she can score, but without Morgan a lot of our offense doesn’t happen.”

Freshman replacement, Skylar Fletcher gathered herself after a hard foul sent the feisty guard sprawling to the court to go 2-2 at the charity strip and once again extend Greenville’s lead to double digits at 41-31.

Greenville starting post player, Annie Hayes fouled out late in the game going up against the larger Lady Skyhawks after contribute big on the defensive end as well as an impressive night on the boards.

“People have no idea what Annie does for us defensively,” stated Kerns. “She is going to be a really hard one for us to loose next year. The stat line will never show what she does. I would take Annie Hayes on my team anytime. She’s an amazing kid who does everything she is ever asked to do.”

With under a minute to play and the Lady Wave leading by 11-points, Coach Kerns emptied her bench giving her younger players time on the court in the MVL win.

Behnken led Greenville and all scorers with a game high 32 points.

Behnken came into the night as the MVL’s second leading scorer averaging 18.8 points per game. The Wednesday night performance increased Behnken’s season average to 19.8 points per contest to take over the top MVL spot nudging out Piqua’s Tyla Yeomans’ 19.2 average. 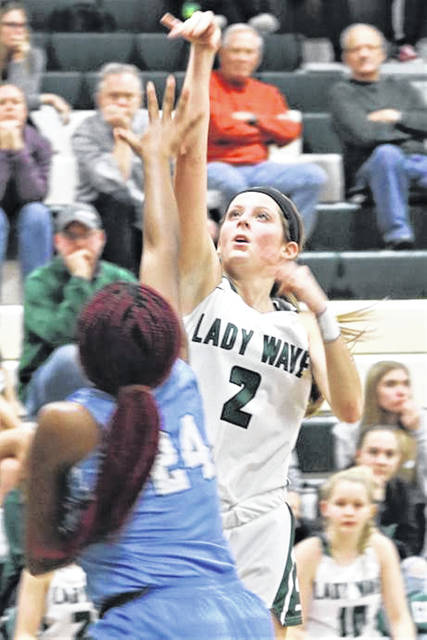 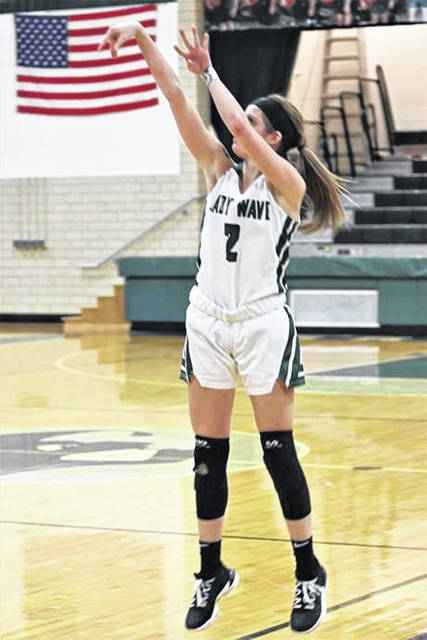 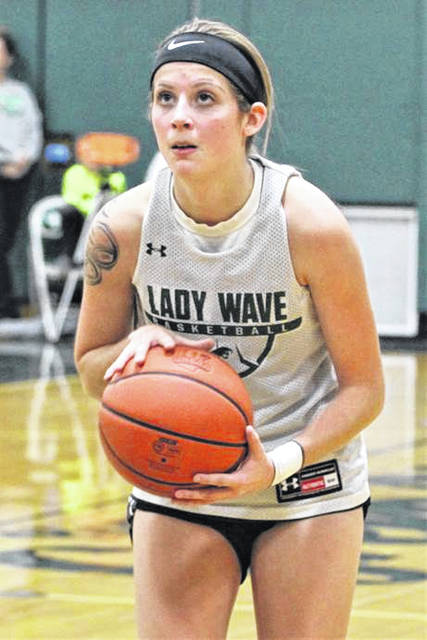 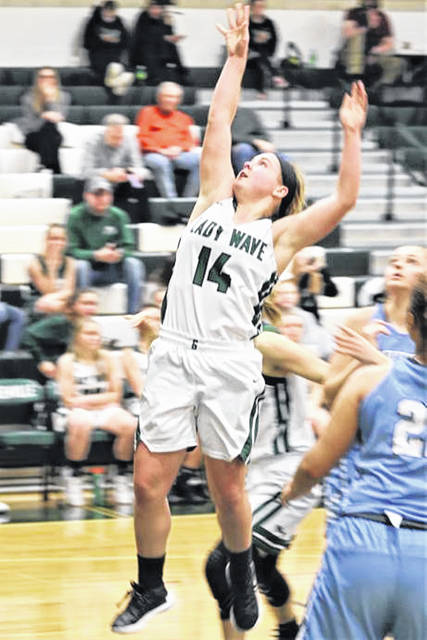 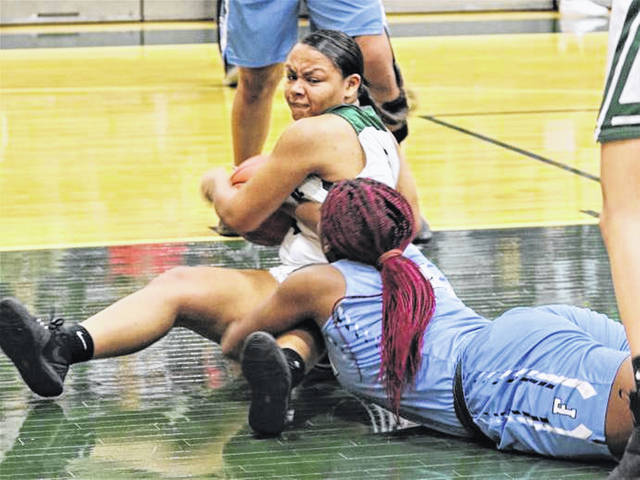 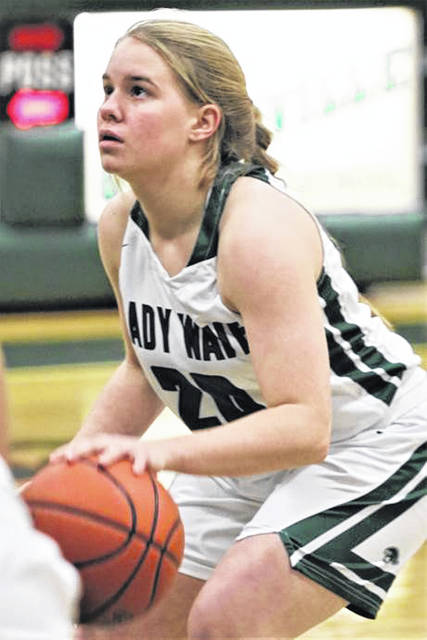 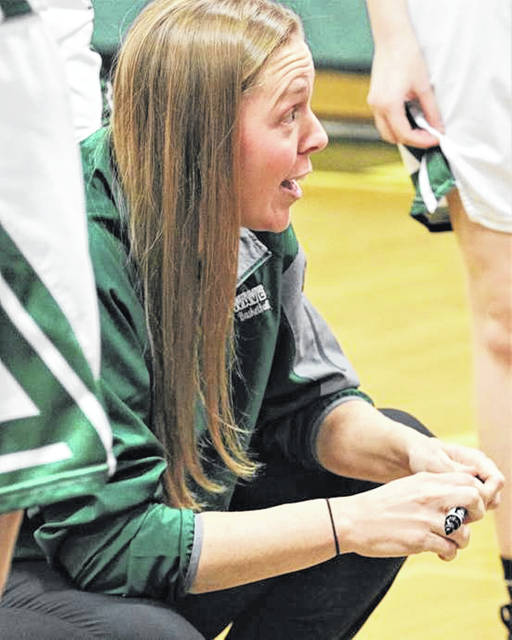 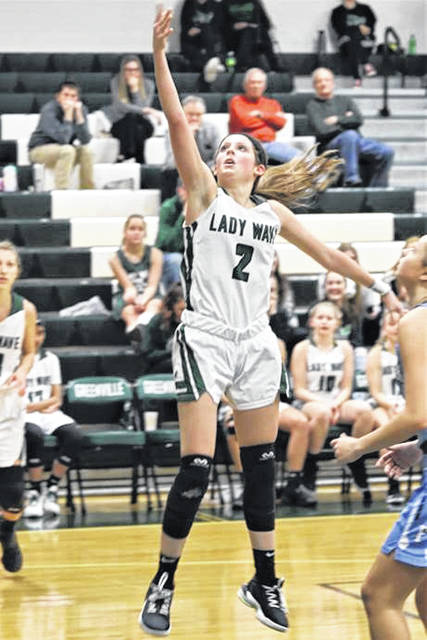 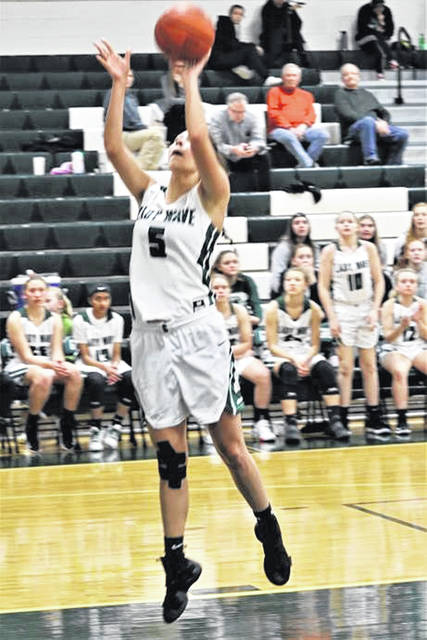