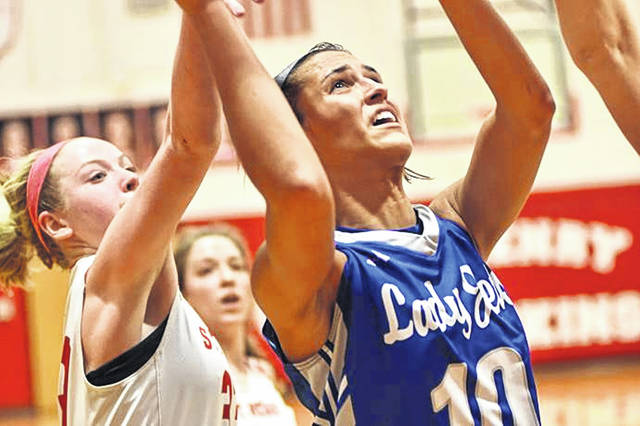 ST HENRY – The FM Lady Jets went into battle against a much larger Redskins opponent and lacked the outside firepower needed to overcome the inside mismatches and easy buckets St. Henry was able to get and eventually dropped a 52-34 game between two solid programs.

The Jets found themselves trailing 15-8 after the first quarter with Corina Conley accounting for 6 of the 8 points.

St. Henry playing with 4 players 6’ tall used their length in the zone to make it difficult to get the ball inside and had a high hand to make outside shots tough as well. The Jets were unable to knock anything down from the perimeter in the first half going just 1-14 from outside and that lone triple was from Belle Cable in the 2nd quarter. The Jets scored just 5 points and trailed at the half 25-13.

One thing you can always count on with Franklin Monroe they won’t roll-over and came out in the 3rd quarter going hard on the defense and pressuring the ball man-to-man all over the floor and got a few turnovers to get some easier baskets. Conley would carry FM in the 3rd quarter scoring 12 of the 14 points including two triples. But despite that St. Henry was able to score 14 as well getting a lot of easy baskets inside by being patient and running their offense.

The Jets tried to shoot their way back into the game in the final stanza but no one could find the range from behind the arch and the game started to slip further away.

St. Henry would out-rebound the Jets 37-25. Chloe Peters led FM with 8 rebounds and Conley had 7.

The Jets forced 14 second half turnovers to try and sneak back into the game but going just 4-for-26 from the outside was too much to overcome.

Conley led all scorers in the game with 22 points. The Jets fall to 12-2 overall and at 7-1 in the conference one game behind Tri-Village and Arcanum. Franklin Monroe will play Arcanum Thursday night.