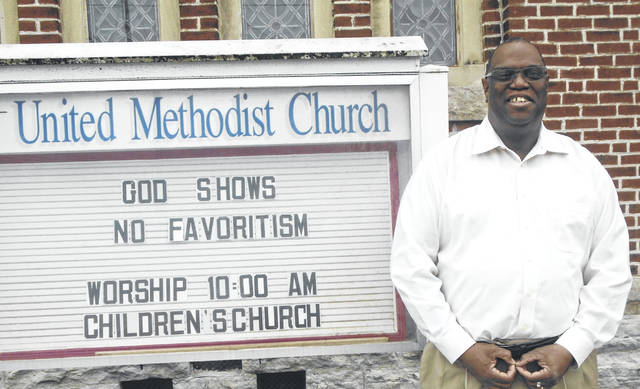 The 59-year-old pastor grew up in Youngstown and has always wanted to be a pastor, because his grandfather, the late James Randy, was a Baptist minister, and he spent a lot of time with him.

Richey, who earned a two-year degree at Sinclair Community College and four-year degrees at Capital University in philosophy and social work, received his master’s degree from United Theological Seminary in May 2019.

He and wife Beverly are the parents of his namesake, 25-year-old David, who will be graduating from Capital University in May with a degree in social work.

The local pastor, who enjoys reading and working crossword puzzles, is the son of Lillian and Haywood Smith and of his adoptive parents, the late Dorothy Richey and her husband. He also has three sisters and a brother.

He is enjoying the ministry.

“I like being involved with people; not only in preaching the word but walking with them in the Lord,” he said. “I not only tell them scriptures, I show them how to live out those scriptures.”

Since coming to New Madison, he has joined the Kiwanis Club and works with the Baptist and Brethren churches in the area.

“Here at New Madison, we hold Good Friday services together with the other two churches; have a Thanksgiving program; and on the first Friday in May we have a National Prayer Day.

Membership at the New Madison church is 45, while Eldorado membership is 32.

“We just had a Christmas Eve program together and we will do an Ash Wednesday service Feb. 26 at Eldorado, which will also include Fort Jefferson United Methodist Church,” he said.

The New Madison church also hosts a harvest dinner each November, hosts a Fourth of July Pancake Breakfast annually, a September dinner, a 5K run the first Saturday in June every year and sponsor Camp Growth every summer for four weeks in June and July.

Since being involved with New Madison Kiwanis, the pastor has helped with its sausage concession the first summer here.

He even worked on orders at the Great Darke County Fair.

“I thought Miami County Fair was big,” he said. “I’ve done two fairs. I work the grill and plan to work there again this year.”

He’s familiar with the kitchen.

“My son and I make our dinners at home,” he said. “My wife works second shift.”