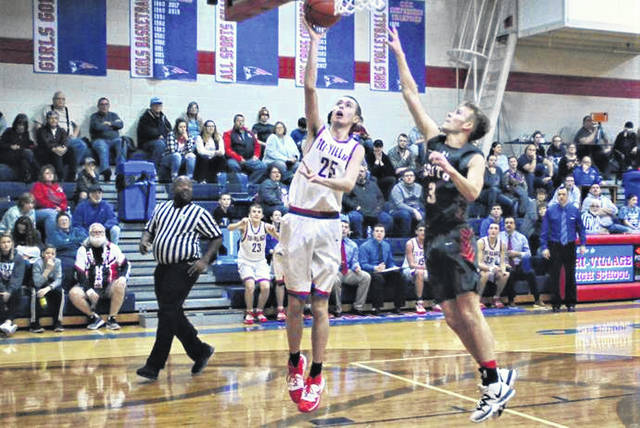 NEW MADISON – The Tri-Village Patriots simply dominated in all phases of the game against league foe Twin Valley South. South has had a resurgence in the new year and has had some impressive wins. They were riding a wave coming into the game, but that wave crashed hard against the stalwart defense and balanced offense of the Patriots. It was a lopsided 56-24 victory for the home team.

The first quarter was all Patriots, they opened the game with a 14-0 run. The team used a man to man defense to hold South in check and attacked the basket at the other end of the court. South barely avoided a first quarter shut out when Brayden Marker scored with 3 seconds left in the period.

Defensively, Tri-Village did press a bit in the first half and had success. South tried to turn tables on the Patriots by pressing themselves, but the Patriots handled the pressure well. Hand in hand with their pressure defense, the Patriots were glass cleaners – limiting South to a single shot on most possessions, while getting second chances at their basket.

Offensively, the scoring was balanced for the Patriots. Only one player scored in double figures. And they scored inside and outside. They were able to drive to the basket and still hit perimeter shots to keep South’s defense off balance. The Patriots seemingly could do no wrong, and South couldn’t get anything going. It was 35-12 at halftime.

The Panthers did slow the pace of Patriot scoring at the start of the second half, but couldn’t generate any offense themselves. The Patriots adjusted on offense and went back to work to finish the 3rd quarter with a 30 point lead. From there, the Patriots were able to cruise to victory for a satisfying league victory.

Coach Bobby Jones was satisfied with the win, “This was the best, most complete game that we have played this season. We came into the game with a chip on our shoulder; we knew that South had some quality wins and we were prepared for them. Our bigs did a good job rebounding, but even our guards were able to get to the ball.”