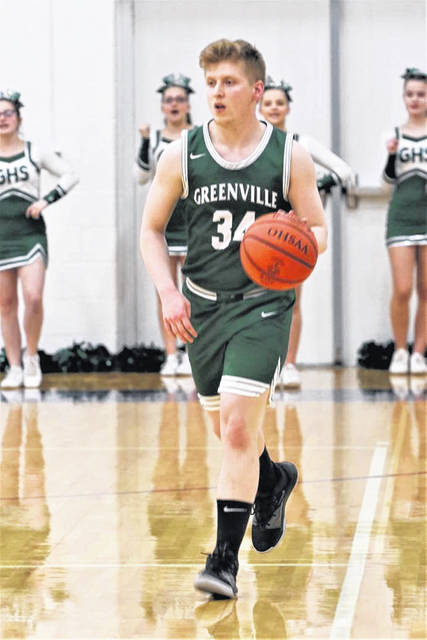 “Great defensive effort tonight to hold them under 40-points,” said Greenville coach Kyle Joseph. “We talk about being great at what we are good at and we did that tonight – then offensively we did good enough to win.”

Greenville grabbed a 12-4 lead after one period of play with Foster Cole hitting a 3-pointer and 2-point goal for 5-points, Alec Fletcher adding a field goal and free throw for 3-points and Tyler Beyke and DJ Zimmer each adding a basket.

The Skyhawks battled back to take the second quarter 10-7 sending the teams to the break with the Green Wave holding a 19-14 advantage. All GHS second quarter points were scored by Cole including a trey and two 2-point goals.

Period No. 3 had the teams playing to a 13-13 score with Greenville getting balanced scoring. Zimmer hit for 4-points, Cole knocking down his third triple of the night and 2-points each from Marcus Wood, Alec Fletcher and Tyler Beyke sending the game to the final period with the Wave up 32-27.

The fourth quarter saw both teams going to the free throw line with Greenville making 10-of-18 and Fairborn 7-of-9 as the Wave would take the final period by a 14-12 score to secure the Miami Valley League win.

“Fairborn did a good job mixing up some defensive looks but we found ways to get the ball into Foster and DJ,” Coach Joseph stated, “and they delivered for us.”

Zimmer paced Greenville in fourth quarter scoring with 8-points; 6-points coming at the line, Wood 5-points; 3-points at the charity stripe and a Cole free throw.

Foster Cole led Greenville and all scorers with a game high 16-points in the win.