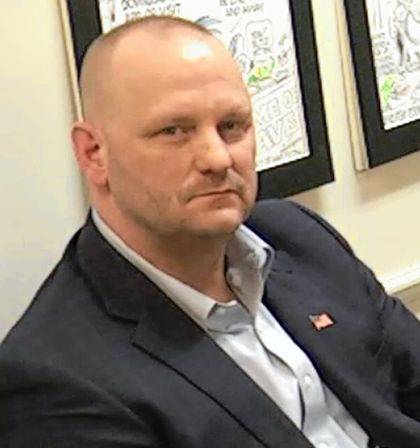 HOLLANSBURG – Republican voters will have a choice to make on March 17 in the Primary Election. Two candidates have filed to represent the party on the General Election ballot in November. One of those vying for the seat currently held by Mike Rhoades is Matt Harrison.

Harrison currently serves as the mayor of Hollansburg where he has also served as a council member. He is a former volunteer firefighter for 15 years, EMT for 10 years and has been a member of the Tri-Village Rescue board for almost a decade. He is currently the president of the Darke County Mayor’s Association. He also heads up the sewer district for Hollansburg and Palestine and cemetery board. Other than a small stipend for being mayor, Harrison said, “I don’t get paid. So I’m not in it for the money. It’s about making a difference. I’m a firm believer that you can’t make a difference unless you get involved.”

The candidate said he grew up in a family where they didn’t have anything and he has worked hard to get to where he is. “I was blessed with the right men to come into my life at the right time and say this is how you do it,” Harrison said.

Harrison believes he is an innovator. Innovation is something he has done at his position at Winner’s Meats and his deer processing business by coming up with different flavors and techniques, but it is also something he has done as mayor. He has looked at some of the smaller villages and believes they are fading away. Through the mayor’s association, Harrison is working on a non-profit organization to pool the resources of the smaller villages to better their chances to get grant funding.

The organization, called Darke County Reinvestment, would help villages that are having a hard time coming up with matching funds because they don’t have the funds available for projects due to the mandates given by the state. By bidding the projects in each community as one project, he believes they can get a better price. He also wants the organization to develop a database of ordinance templates to help communities save money. Another advantage to the organization would be to pool funds and purchase equipment, such as a crack-sealer, that could be used by all of the communities.

The individual communities are at the heart of his campaign. He said if they could start chipping away at the problems and start doing improvements it would increase the morale of the community. “We could start bringing in people that will pay their taxes and potentially fill the jobs here in Darke County that are not currently being filled,” he said.

Harrison’s top three issues he would like to address as a commissioner are fiscal responsibility and pay off the debts the county currently has, do a better job of opening the line of communication between the county and other communities, and small community investment.

The candidate is also concerned with “slum lords,” in Darke County. Harrison shared that rental properties are a business and should face regulation like other businesses.

Harrison has been asked why we should have a commissioner come from Hollansburg. He explained he purchased his home there because it was affordable and is now nearly debt free. He believes he has shown that he is fiscally conservative. “Is living in Hollansburg so bad if you don’t have debt?” he asked.

“Whoever gets elected commissioner, it’s basically the same thing as me being mayor. You, the community, are only going to get what I put in. I like to think my track-record would be enough to say this is who we want.”