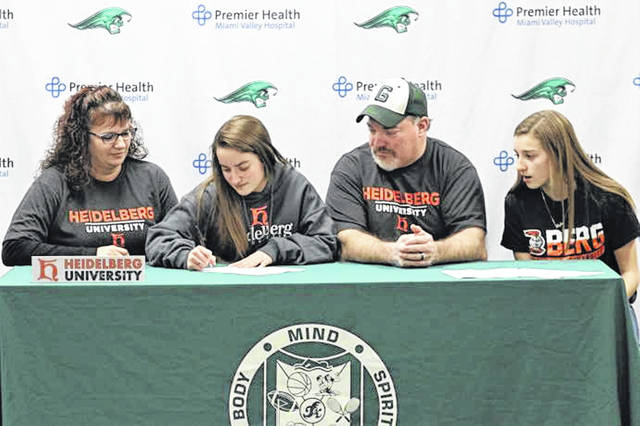 GREENVILLE- Greenville’s Courtney Bryson, the daughter of Marlo and Ty Bryson signed Thursday to continue her education with studies in Criminology while continuing her sports career with the Heidelberg University Student Prince softball program.”

“Great kid, great family, just a class act,” said veteran Lady Wave Softball coach Jerrod Newland. “I threw her to the dogs right off the get-go because she had two or three skill sets that I could utilize as a coach.”

“Courtney is a five tool kid that can play all nine spots on the field,” Newland noted. “I am proud of Courtney and how she has grown as a person, player and leader over the past seasons.”

Bryson has met the Heidelberg coaching staff and stated; “They are very friendly and nice. I like them a lot.”

Bryson hopes to help build the Heidelberg program that ended the 2019 softball season with a 14-22 overall mark and 6-12 in the OAC.

“I am hoping to help them build the program because right now they have a new coach,” Bryson said. “She was the assistant but now she is the new head coach – they are trying to build back up.”

Mari Deppe was named interim head coach after previously serving as Heidelberg’s full-time assistant coach for one season and now takes over the head coaching position for the 2020 season.

“Coach Deppe is now the full time coach,” Newland said. “A good program, great conference. Bryson and Shaffer (GHS alum and current Muskingum University softball player, Karsyn Shaffer) will tee it up a couple times. Just neat to get her up there and not too far away from home. Excited for her and the opportunity ahead.”

“Courtney is going to go and get a chance to make a quick impact for Coach Deppe,” added Newland. “Courtney is part of a senior class with 80 win and has already won the past three District Finals.”

The speedy Bryson’s three year stats include a .459 batting average (67-146) to go along with 83 runs scored and a Lady Wave senior season still ahead.

“Earlier today somebody said I hope she makes the traveling roster,” said Coach Newland. “Well, I know Courtney is going to make the traveling roster. Courtney is going to play because she covers ground in the outfield, she’s a great base runner and she can play the short game. She is bringing in three skill sets right off the get-go that will help any team right away.”

“I’m just glad we got her this spring,” Coach Newland concluded. “Heidelberg is really excited to get her and she is excited to go there – just a great softball player.”