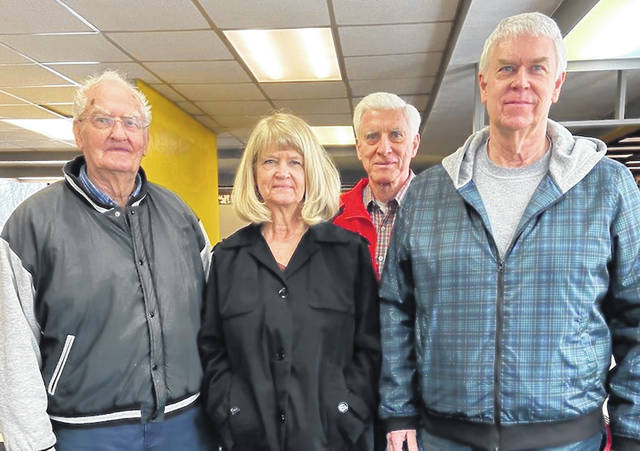 GREENVILLE — Donald Booker has just about done it all.

The 98-year-old World War II veteran was an employee of various businesses throughout the years before and after retirement and even became a Greenville police officer at one time. The widower also still drives.

He has been through three colon cancer operations and is blind in his left eye because of glaucoma in both eyes.

The family eventually moved north, and Don went on to graduate from Ansonia High School in 1940.

His wife, the former June Hiatt, was a graduate of Palestine High School and had worked with Norma Knick in payroll at the Darke County Courthouse. He met her while he was working for Garrison Well Drilling and went to a job site at her family’s residence.

They are the parents of two children, Debby Sodders of Greenville and Craig of Fort Wayne, Ind. There are two grandchildren and two great-grandchildren.

After he got out of the service, Booker worked for Union City Body Company until work there started to slow down, then he became a member of the Greenville Police Department. He was assistant chief from September 1978 until he retired.

And, oh the memories he has.

He was the first police officer to respond when a woman was found in her house on Vine Street, after having been eaten by her 20 cats in December in the late 1960s; was driving the cruiser with a partner at his side, chasing a stolen car out of Greenville, which had rolled over and crashed, killing the driver; and he almost delivered a baby on a thick icy roadway in the 1950s, but made it to the hospital.

“I’ve been through it all,” he said. “I used to spend every Saturday night when downtown Greenville was busy, standing at the corner of Fourth and Broadway, watching the banks whenever deliveries were made there. Two men from West Manchester and Castine would always come and sit with me. They were truck drivers.”

One time, Booker said he was driving a police cruiser, when two young boys with squirt guns used them on him in passing.

“They gave me a shot of water,” he recalled, comically adding, “I stopped them, got the (squirt) guns and did the same thing to them.”

He said back then, there was very little trouble.

“He walked the alleys off of Broadway with a flashlight and no gun,” his daughter said.

“My wife, who is from Dayton, called Greenville Mayberry and me Opie,” son Craig said.

His stint in the military will be featured in an article that will appear this coming weekend in the Early Bird.